Reanalysis of the BM4 Sign on A Vessel from The Chocolate Museum, Cologne, Germany

This note reviews Krempel et al.’s (2017) analysis of the sign BM4 (Macri and Looper 2003), depicting a small chick inside a bird’s beak, and known from other contexts to be used in the spelling of the word y-aal ‘her child [child of mother]’, as a substitute for the Initial Sign Collocation (ISC) of the Primary Standard Sequence (PSS), and therefore as a potential allographic substitute for the most frequent main sign of the ISC, T617/1M2. I propose that this is analysis requires revision, for two reasons: BM4 can be in fact analyzed as a spelling of the kinship term ‘child of mother’ in this text, as in all other cases where it appears; and this particular PSS constitutes an example of a small subset of PSS texts that lack the ISC before a so-called dedicatory verb. This means that the reason BM4 appears before the GOD.N dedicatory verb is pure coincidence: the scribe ran out of room to complete the name phrase of the mother of the intended recipient of the vessel, and the scribe did not begin the text with the ISC, but instead with the GOD.N verb, resulting in the rim text ending prematurely as it wrapped around back to where it began.

Krempel et al. (2017) is a superb examination of two painted pots, a cup and a bowl, housed at The Chocolate Museum in Cologne, Germany. The vessel in question here, a representative of the Saxche Orange Polychrome, Saxche Variety, ceramic type, is cataloged as Inv.-No. 50061, measures 18 cm x 12.1 cm, and bears a painted text comprising 11 glyph blocks (Figure 1A). Those authors (2017:10–11) identified this instance of BM4 (Figure 1B) as occupying the first position in the text, and thus taking the place of the ISC; they propose a reading ‘AL for ‘a’l[ay] ‘here’, following MacLeod and Polyukhovych’s (2005) identification of the ISC as representing a deictic demonstrative. The authors suggest that “the scribe used the rare substitution ‘AL? for the common version of the Introductory Glyph ‘a-‘ALAY?-ya,” and they note that this sign is seen elsewhere in spellings of “the parentage statement y-al,” for ‘her child’, and provide examples (2017:13, Fig. 9) in which juxtaposed syllabograms ya and la support such reading (Figures 1C–D), noting that the BM4 may be “read ‘AL in some examples and YAL in other ones.” 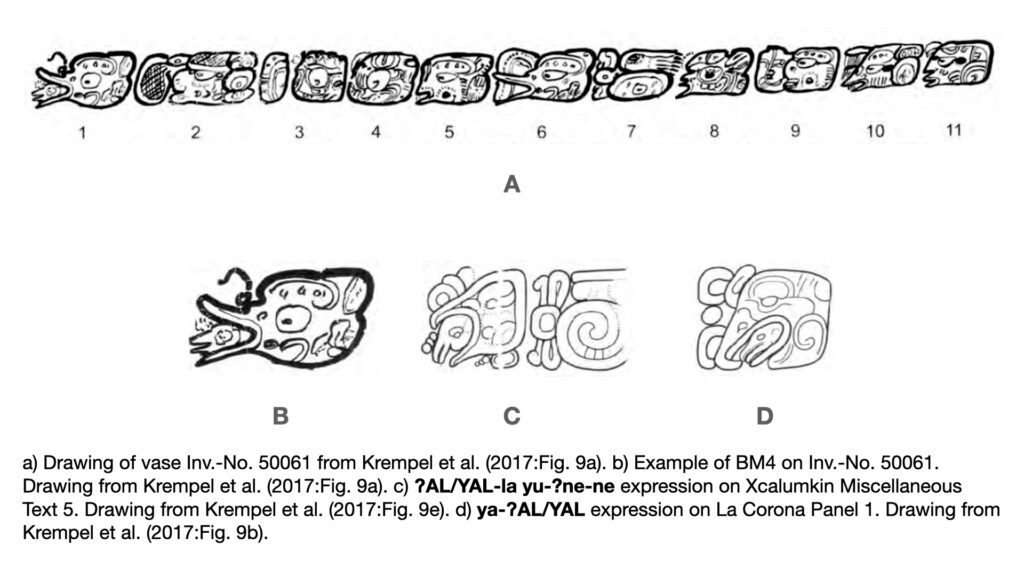 First, I draw attention to a common occurrence in PSS texts: scribes sometimes ran out of room and did not “finish” a text. Figure 2A presents a case in point, vessel K4976. Note that the text on K4976 (Figure 2B) begins with the ISC (Glyph Block A) and when the text wraps around the rim, it ends with yu-ne (Glyph Block P), for y-unen ‘the child of [father]’, before returning to the ISC. The yu-ne expression is typically followed by the name of someone’s father. In fact, the intended recipient of the vessel, referred to as CHAK ch’o[ko] ke-KELEM for chak ch’ok keleem ‘great youth young male’ (Glyph Blocks I–K), is immediately followed by ya-YAL/ʔAL for y-aal ‘the child of [mother]’ (Glyph Block L), itself followed by the mother’s name (Glyph Blocks M–O). The text ended with Glyph Block P, yu-ne. Thus, the scribe did not have enough room to provide the name of the father of the intended recipient of the vase. 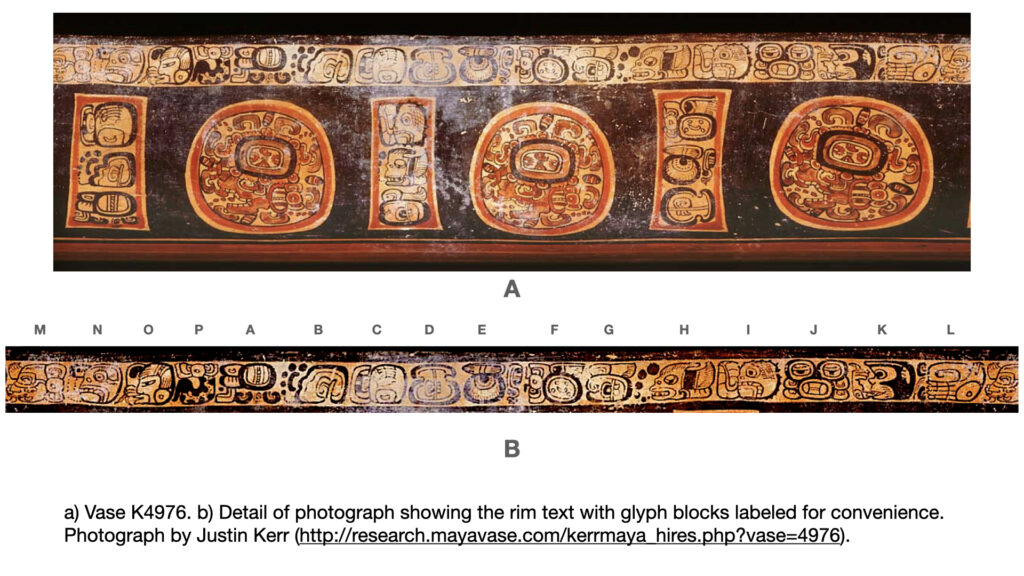 Second, K4976 is not the only text in which the intended recipient’s title or name is followed by a parentage statement, and more specifically, given the typical order, in which the mother’s name precedes the father’s name. In fact, there exist several PSS texts in which the ya-YAL/ʔAL expression follows immediately after the KELEM expression, with K4976 being but one, as seen in Figure 3A, with the sequence ke-KELEM ya-YAL (Glyph Blocks K–L), followed by the glyphic name phrase referring to the mother, and the PSS text on Vessel 38 in Coe (1973:84–86), seen in Figure 3B, also showing a sequence ke-KELEM YAL-la (Glyph Blocks R–S), itself followed by the mother’s name (not illustrated). Consequently, it stands to reason that the PSS text on Inv.-No. 50061 follows the same pattern: that the title of the intended recipient, CHAK ch’o/CH’OK KELEM (Glyph Blocks 9–11), is followed by the parentage term, YAL for y-aal, that would introduce his mother’s name, as seen in Figure 3C. The only difference between Inv.-No. 50061, on the one hand, and K4976 and Vessel 38 from Coe (1973), on the other, is that the scribe who painted the text on Inv.-No. 50061 ran out of room to provide the mother’s name, let alone the father’s name that would have followed. Again, scribes ran out of space occasionally, as is seen in Figure 3D, where yu-ne ends the PSS text on K4976. 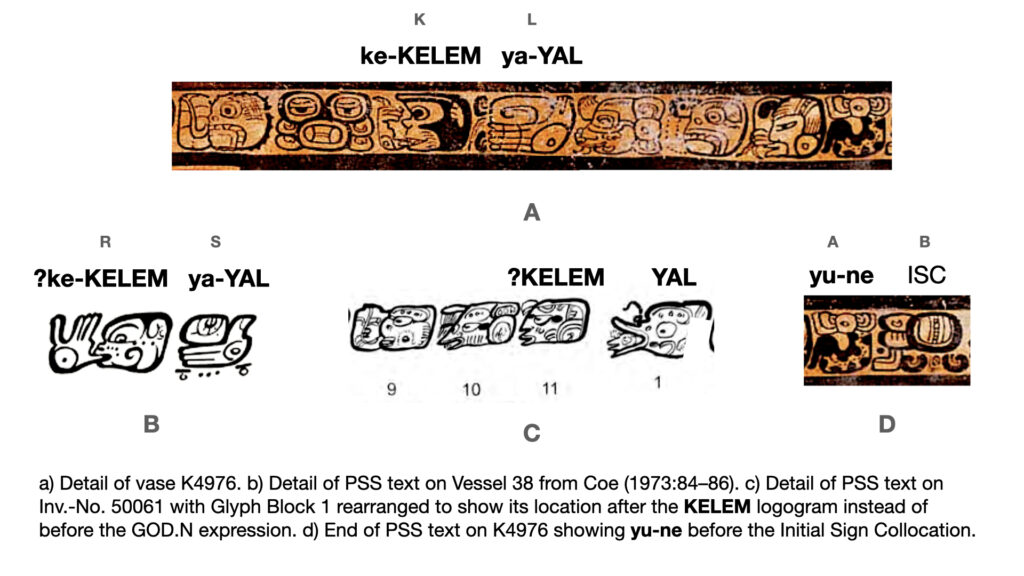 Finally, what about the ISC? The vast majority of PSS texts that include a dedicatory verb bear an example of the ISC preceding such a verb; there are close to five hundred PSS texts on portable objects that behave this way. Nevertheless, a few, a very few, don’t: K5035, K5976, K6436, K8007, K8220, K9096, K9115 likely constitute the majority of such examples on portable texts. Figure 4 illustrates three of these: the first (Figure 4A) begins with the GOD.N expression, the second (Figure 4B) with the K’AL-ja GOD.N-yi sequence, and the third (Figure 4C) with the STEP[yi] expression. It should be clear, at this point, that Inv.-No. 50061 constitutes yet another example of a PSS text with a dedicatory verb that bears no ISC, and instead, the YAL sign (Glyph Block 11) precedes the GOD.N dedicatory verb by simple chance: it was the last sign the scribe painted before running out of room and wrapping the text back around to the beginning, which in this case was the GOD.N expression. 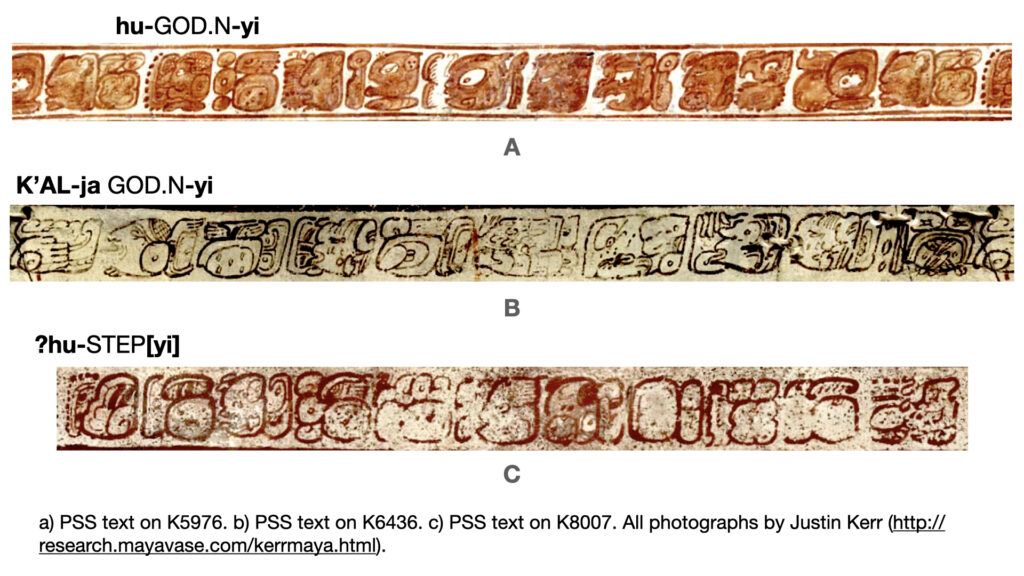 Acknowledgments. I would like to thank Guido Krempel for his generous permission to use his drawing of vase 50061 from The Chocolate Museum at Cologne.

Coe, Michael. 1973. The Maya Scribe and His World. New York: The Grolier Group.