This note pertains to one particular spelling of the Initial Sign Collocation (ISC) originally defined for the Primary Standard Sequence (PSS), specifically one of three cases that appear on Tikal Stela 31.

In her dissertation on the PSS, Barbara MacLeod (1990:53) argued that the ISC, examples of which are seen in Figure 1, represents an inflected form of the existential particle *ʔay, inflected with an inchoative suffix -a(n) as *ay-a in the completive, or *ʔay-an in the incompletive, while acknowledging the daunting task of accounting for all the apparent allograms used to spell the expression, not to mention the logosyllabic spelling patterns involving the syllabograms ʔa, la, ya. She also proposed the optional ʔa and ya syllabograms as phonetic cues for a reading ʔAY for the IS logogram, most typically a form of T617/1M2, and the occasional la as evidence for the presence of a different inchoative suffix of the form -l-ah (i.e. -l-aj), resulting in a form *ʔay-l-ah-Ø ‘it came into being’. She argued that the use of inchoative suffixes with the existential particle would derive a verb with the meaning ‘to come into being’. 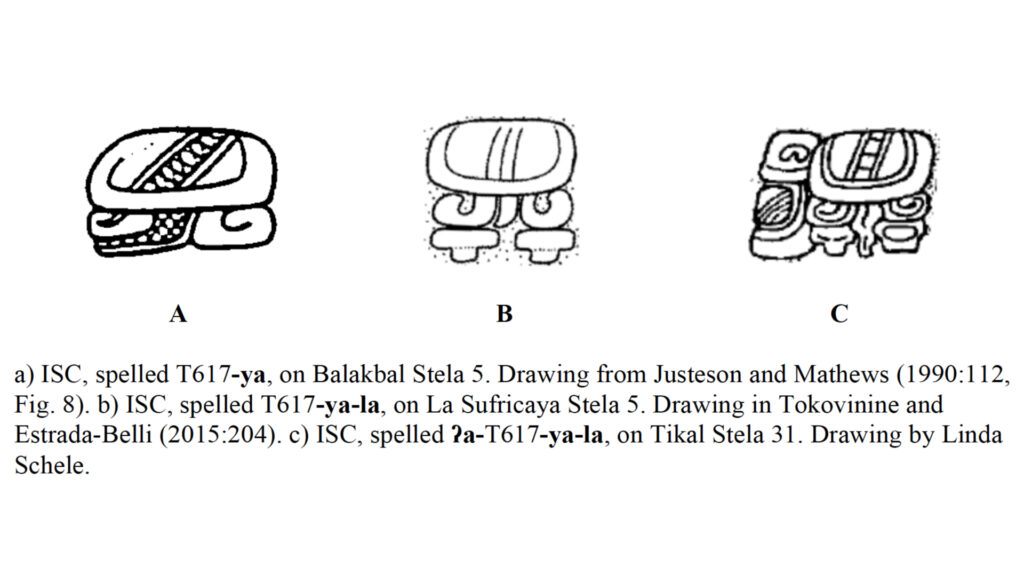 MacLeod (1990:49–50) further proposed that at least one of the spellings on Tikal Stela 31 could be transcribed as T617-ya-na, providing explicit support for the proto-Ch’olan reconstruction *ʔay-an for the existential particle by Kaufman and Norman (1984:116), and thus pointing to the -an inchoative suffix. Such suffix was argued by Justeson et al. (1988:125) to be present in both Ch’olan *ʔayan and Yucatecan *yàan, in the latter case as a result of diffusion of a pre-Ch’olan form *ʔay-aan into Yucatecan in the context of the Lowland Mayan contact region. This suffix would be implicated in the Postclassic codical spellings of the existential particle as ʔa-T667-ya-na (Fox and Justeson 1984:1984:56-57, note 34; Justeson et al. 1988:125). Such an identification, of a spelling with na at Tikal during the Early Classic period, would support MacLeod’s proposed readings *ʔay-an (incompletive) and *ʔay-a (completive), given the corresponding incompletive/completive forms of the Ch’olan inchoative -ʔan (incompletive) and -ʔa (completive), as illustrated with Ch’ol lujb’-ʔan ‘to get tired’ vs. lujb’-(ʔ)a ‘got tired’ (cf. Kaufman and Norman 1984:102). In this way, spellings like (ʔa-)T617-ya-na and (ʔa-)T617-ya would be contrastive, for ʔay-an ‘it comes into existence’ and ʔay-a ‘it came into existence’, respectively.

In my previous work, I have supported MacLeod’s proposed decipherment of the ISC as connected to the existential particle (Mora-Marín 2001:111-112, 521, Fig. 4.5; 2005:9-11, 12-16, Table 3, Fig. 4). Nevertheless, the difficulty of explaining its function in preverbal contexts has also led me to opt for the deictic function (alay ‘this (here)’) favored during the early 2000s by MacLeod and Polyukhovych (2005); consequently, I have also adopted such approach in some of my work (Mora-Marín 2004, 2007, 2010). More recently, I have uncovered linguistic and epigraphic evidence that strongly supports and clarifies the original existential particle identification by MacLeod, in the various contexts in which it occurs (Mora-Marín n.d.). The purpose of this note, though, is limited to discussing the spellings of the ISC on Tikal Stela 31, and more specifically, the case argued by MacLeod (1990) to represent proto-Ch’olan *ʔay-an.

A careful examination of the graphic elements of the signs in the ISC examples from Tikal Stela 31, based on the 3D scanning renderings by Alexandre Tokovinine (2020), allows for clarification: based on such evidence, it can be shown that the scribe responsible for composing the inscription on Tikal Stela 31 was consistent in rendering T178 la in a way that in some cases resembles T23 na, both in the context of the ISC and other collocations where it is unambiguously meant to be read as la; at the same time, it can also be shown that the scribe was consistent in rendering T23 na by means of a very different design that precluded ambiguity with T178 la. Given this, the Tikal examples in question can be definitively read as T617-ya-la.

First, a close look at the three spellings of the IS collocation on Tikal Stela 31 will prove instructive. Figure 2Ashows the spelling ʔa-IS-ya-la, at A12, already mentioned. Figure 2B shows IS-ya-?la/?na, at C19, discussed by MacLeod (1990). And Figure 2C shows IS-ya-?li/la, at G15. In the second spelling, Figure 2B, the final syllabogram is not consistent with the graphic design of T23 na used by the scribe(s) responsible for the carving of this monument. An examination of the instances of T23 na, as well as clear cases of T178 la, will clarify the case of the collocation at C19. 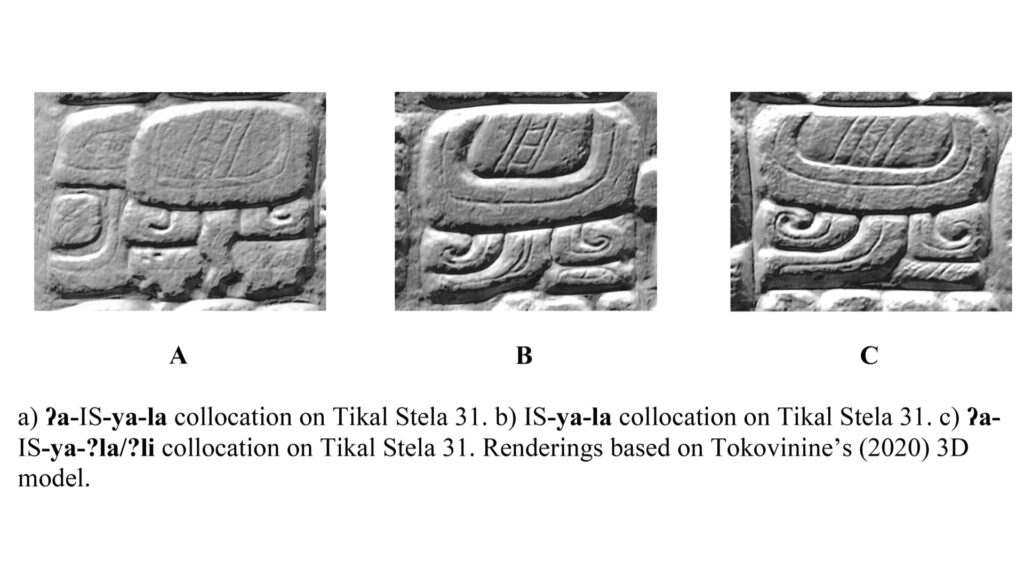 Figures 3A–C show clear examples of T23 na used on this monument. All cases of T23 na on Stela 31 show the same design, one characterized by 3-5 dots arranged diagonally, as well as two large drill-holes on the bottom outline. The sign resembling T23 na in the ISC collocation at C19 bears neither the diagonal line of dots, nor the two large drill-holes at the bottom. It does resemble more standard designs of T23 na, though. The question is whether there exist unambiguous designs of T178 la that might resemble the sign of interest at C19c. 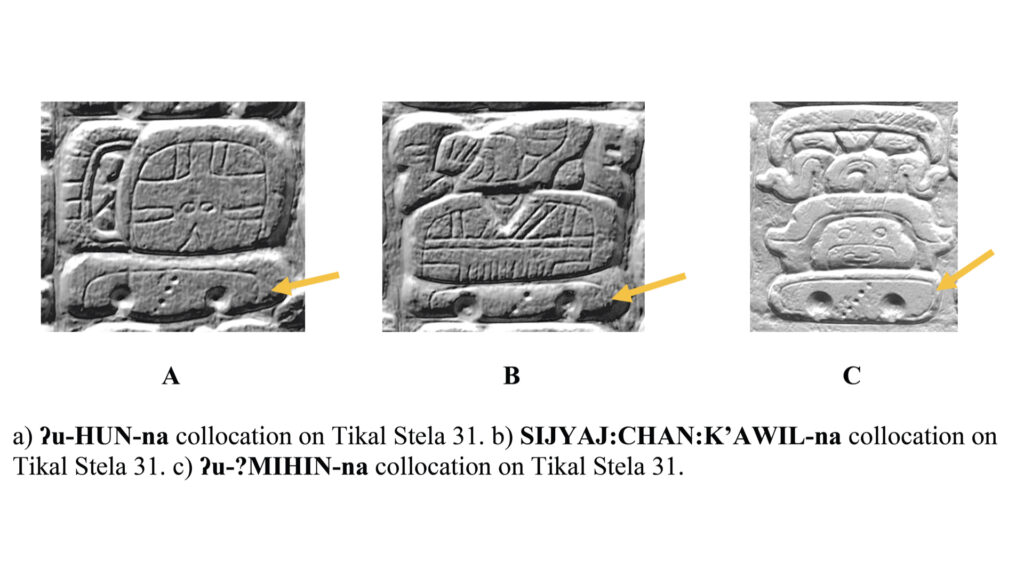 Figures 4A–E show samples of the more common graphic designs of T178 la employed by the scribe responsible for Stela 31. This design consists of an elongated, T-shaped sign, with an internal elliptical or rectangular component (Figures 4A–D); within that internal component, two diagonal bands are usually present (Figures 4A–D), and occasionally, on both sides of the diagonal bands, it is possible to see cross-hatching (Figure 4C). The T-shaped sign is usually doubled (Figures 4A–C), but it need not be (Figure 4D). This last example, appearing at the bottom of the collocation K’AN-TEʔ-la, strongly resembles the sign at the bottom of the ISC on glyph block C19, and they both resemble an instance of a more standard T23 na. However, a comparison with a similar expression on Yaxchilan Lintel 23 (cf. Graham 1982:135), seen in Figure 4E, where it appears as K’AN-TEʔ2-la, employing a more obvious design of T178 la, corroborates its identity as T178. 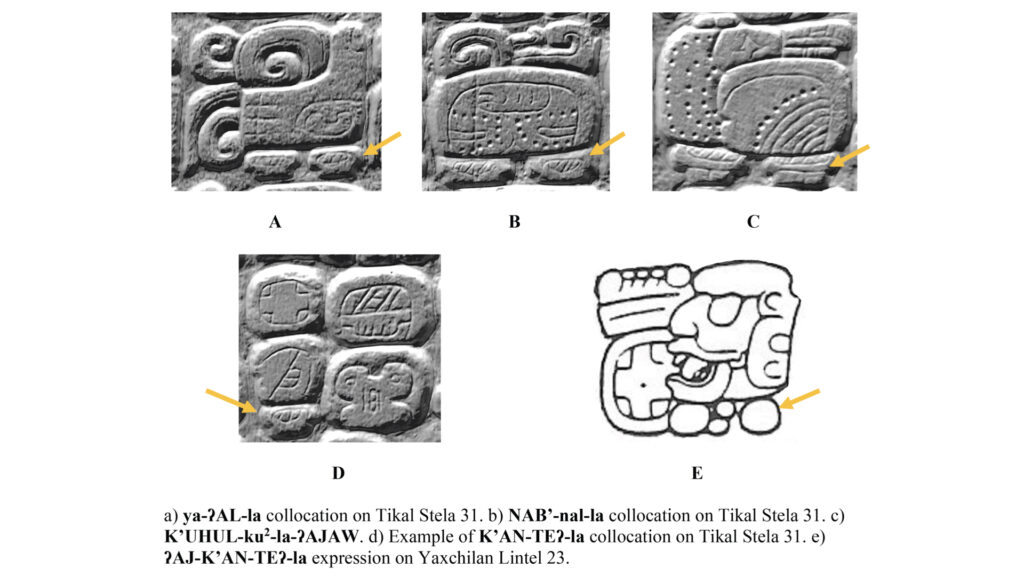 It is this last design of T178 la, the one seen in Figure 4D, reproduced below as Figure 5A, that resembles the version seen in the ISC at C19c on Tikal Stela 31. It is the design that most closely resembles the more typical versions of T23 na, rather than the more idiosyncratic version with the diagonal dotted line that is the norm on Stela 31. 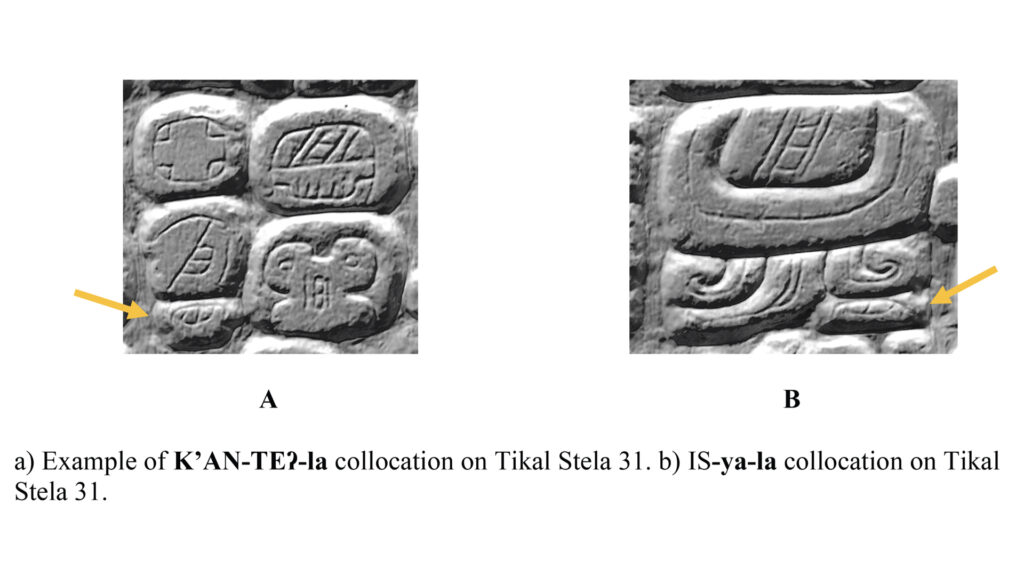 To conclude, the similarity between certain designs of T178 la and the more standard design of T23 na led MacLeod (and others, including myself) to transcribe one of the ISC spellings on the monument as IS-ya-na, but the detailed imaging of the monument by Tokovinine, together with the paleographic evidence, shows that this was an erroneous transcription. The spellings of the ISC on Tikal Stela 31 point to two patterns only: ʔa-IS-ya-la and IS-ya-la.

In future notes and papers I will present new evidence in support of MacLeod’s identification of the ISC with the existential particle *ʔay(-an). However, contra MacLeod’s (1990) original proposal, it is shown not to be a derived inchoative verb, but instead, in its preverbal contexts at least, a grammaticalized use of the existential particle with an aspectual/evidential function. More on this soon.

—–. 2005. The Initial Sign Glyph of the Primary Standard Sequence. Part I: Spelling Patterns. 18 pp. Unpublished note distributed among epigraphers in attendance at the 2005 Texas Maya Meetings. Available at https://davidmm.web.unc.edu/david-mora-marin/.