The Earliest Spelling of ʔusiij ‘vulture’?

This note puts forth an idea that I first published in 2005, and then amended in 2015, regarding a particular passage on Kaminaljuyu Stela 10.  This idea pertains to the reading of what I have proposed to be the name and title of the main individual portrayed on the monument. Before I do this, a bit of background will be necessary.

I began to study the inscription on this monument as an undergraduate student. In fact, my 2005 paper in Ancient Mesoamerica (Mora-Marín 2005) evolved out of several drafts starting in 1995, as a junior at the University of Kansas, and then in 1997, as a first year grad student at SUNY-Albany. It was as a graduate student that I developed a documentation project called LAPIDA (Late Preclassic Inscription Documentation), with support from FAMSI (Mora-Marín 2000) and a small internal grant. One of the main goals of that project was to document the text on Stela 10, as described, very briefly, in Mora-Marín (2005:66, 84). Essentially, I used the following procedure: 1) I utilized a detailed photograph of a rubbing posted by James Porter in a website no longer online, which I then inverted into its negative and printed in a high-quality laser printed in an enlarged format; 2) I used tracing paper on the enlarged printout of the inverted rubbing; 3) I began to trace the text; 4) I compared and improved my drawing by checking it against a cast of the inscription that Joh Justeson had borrowed from Ian Graham; 5) I compared and improved my drawing by checking it against the original inscription at the Museo Nacional de Arqueología y Etnología in Guatemala City; 6) I compared and improved my drawing against the cast again; 7) I inked my drawings; and 8) I scanned the drawings. Figure 1 presents my drawings of the top and bottom panels, excluding the oversized day counts at positions A and F.

Figure 1. Top and bottom glyphic panels on Kaminaljuyu Stela 10. Drawing by the author. 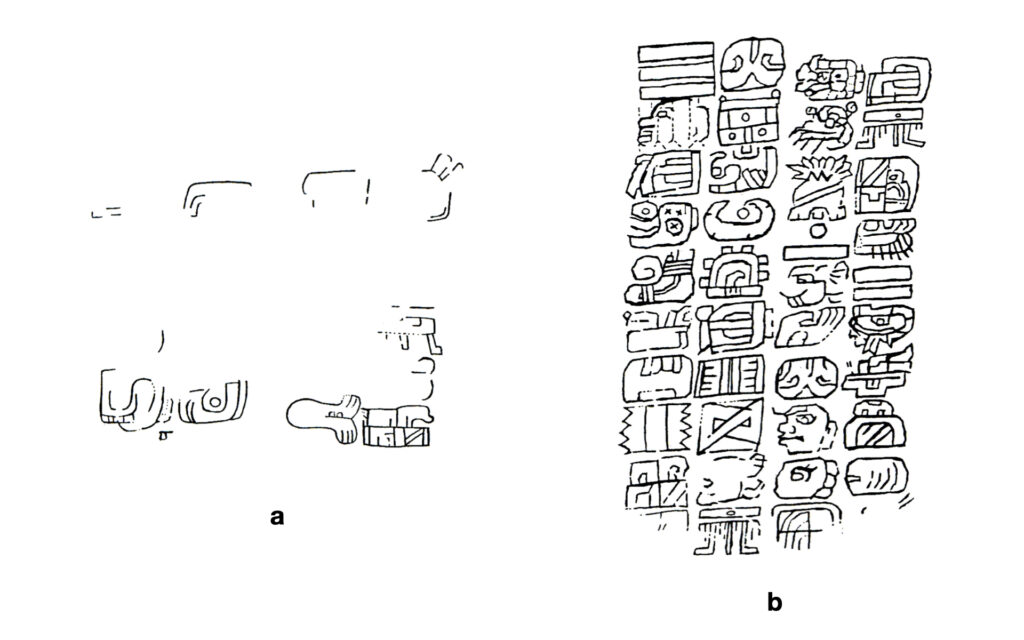 What I did not have at the time, and in fact, still do not, is a high-quality camera capable of taking high-resolution close-up photos to compare my results (the drawing) to the real thing. However, a few years ago, a highly detailed rendering of the inscription, accessed through this link, was published online by Tokovinine (2019). This rendering has made it easier to make detailed observations and gauge the accuracy of my drawing. While I have found small errors, which I plan to correct over the next few weeks or months, overall my drawing holds quite well. Figure 2 provides an animation that illustrates the degree of match between the two. Figure 3 provides a sequence of snapshots. 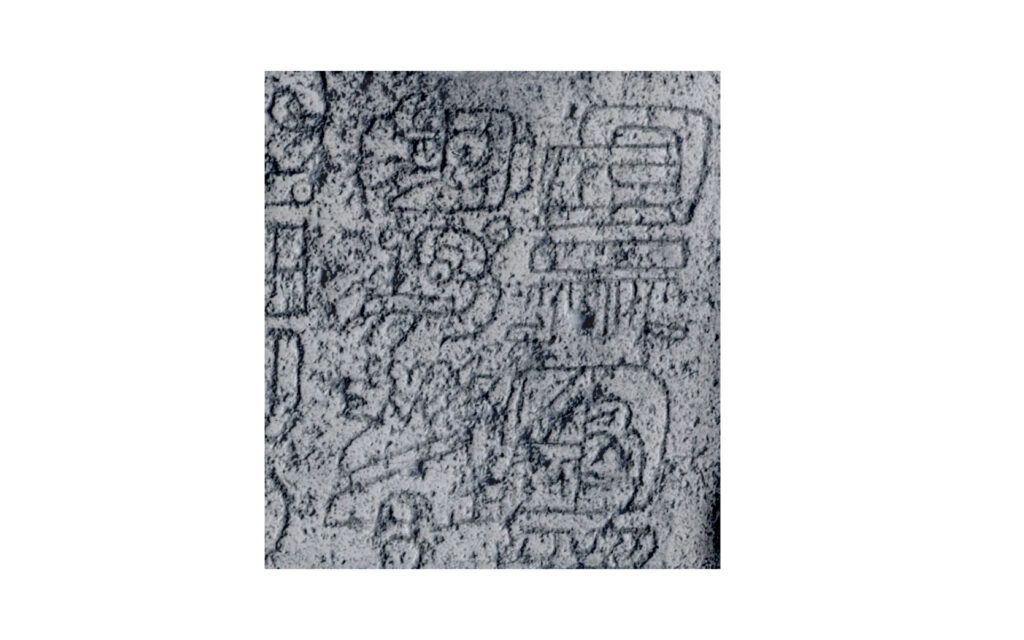 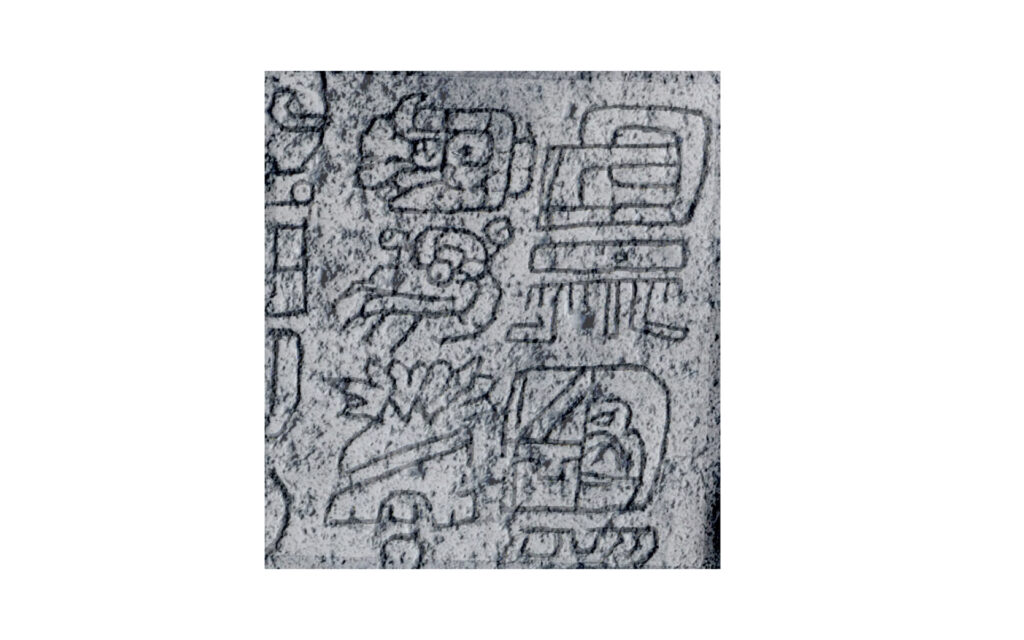 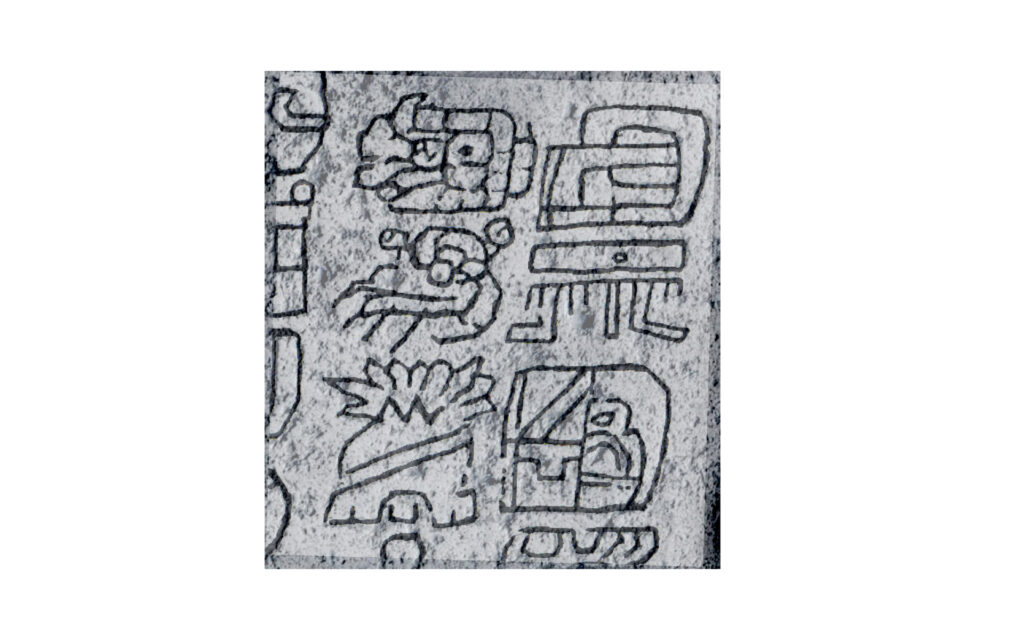 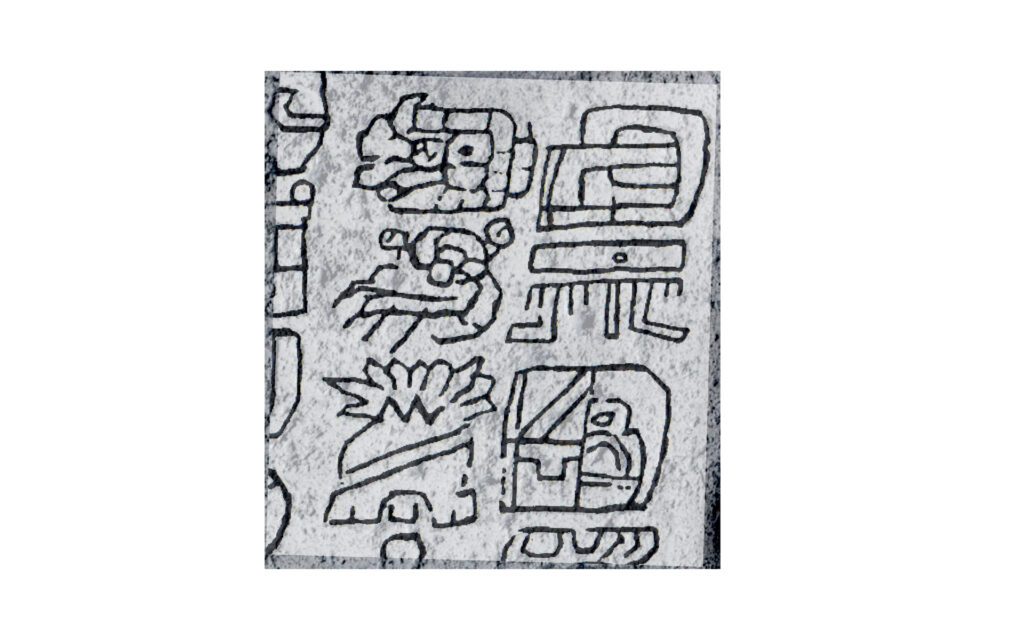 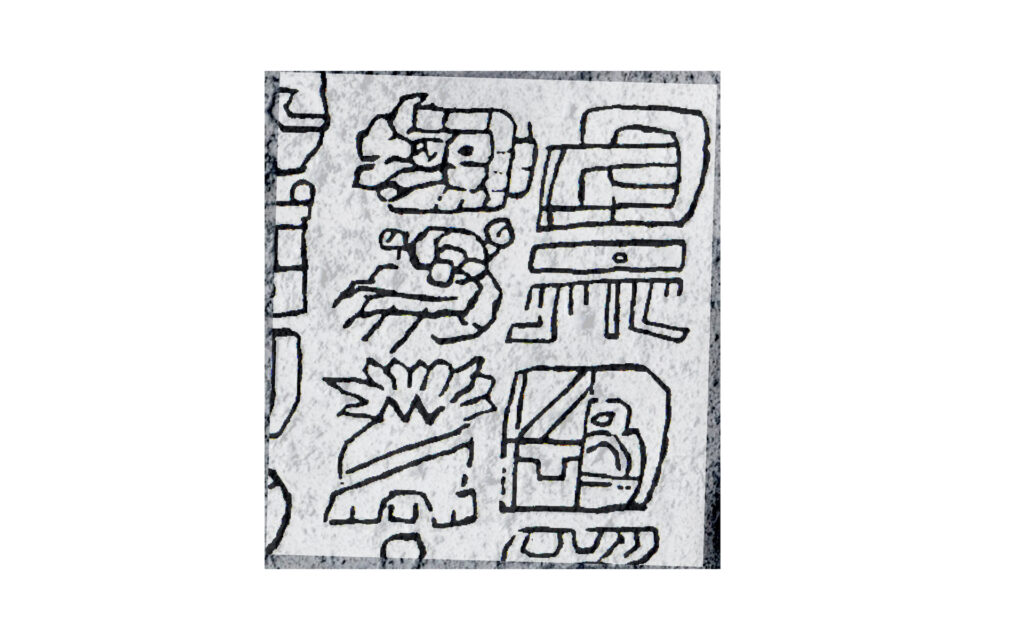 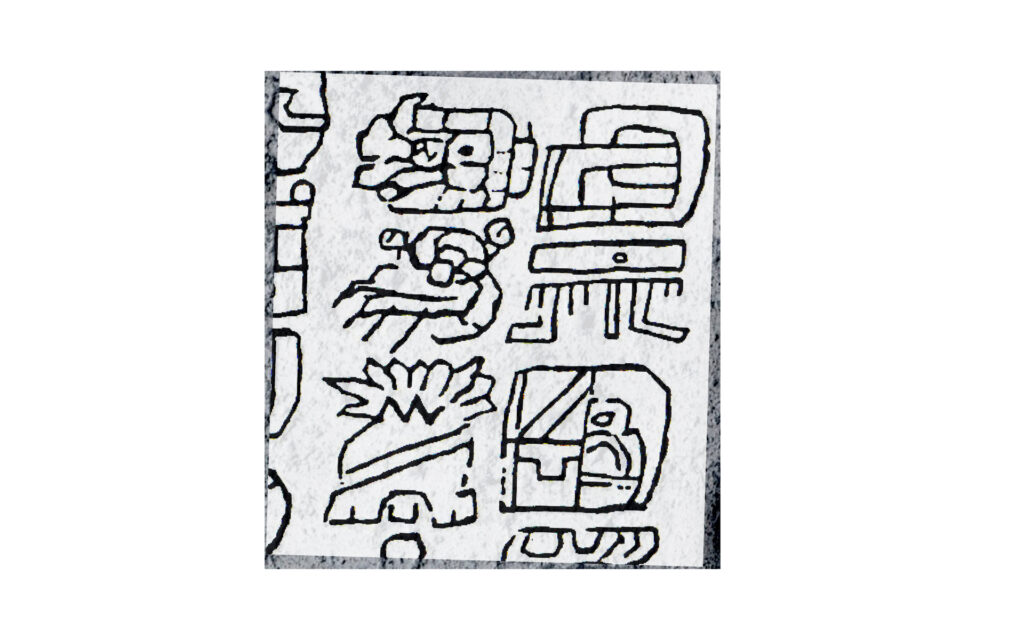 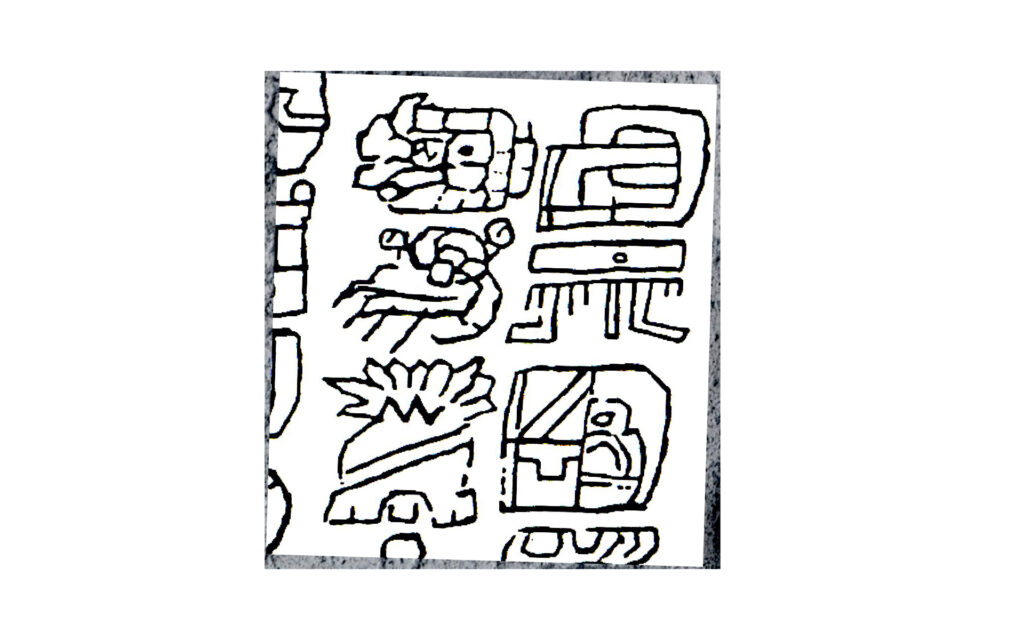 In any case, to continue with the name and title of the main individual and likely protagonist of the text, the phrase in question is found between I1 and J3. Figure 4 provides the location (I1) of the sign that I take to correspond to the head of the main individual portrayed on the monument (cf. Mora-Marín 2005:77, 82, Fig. 14). 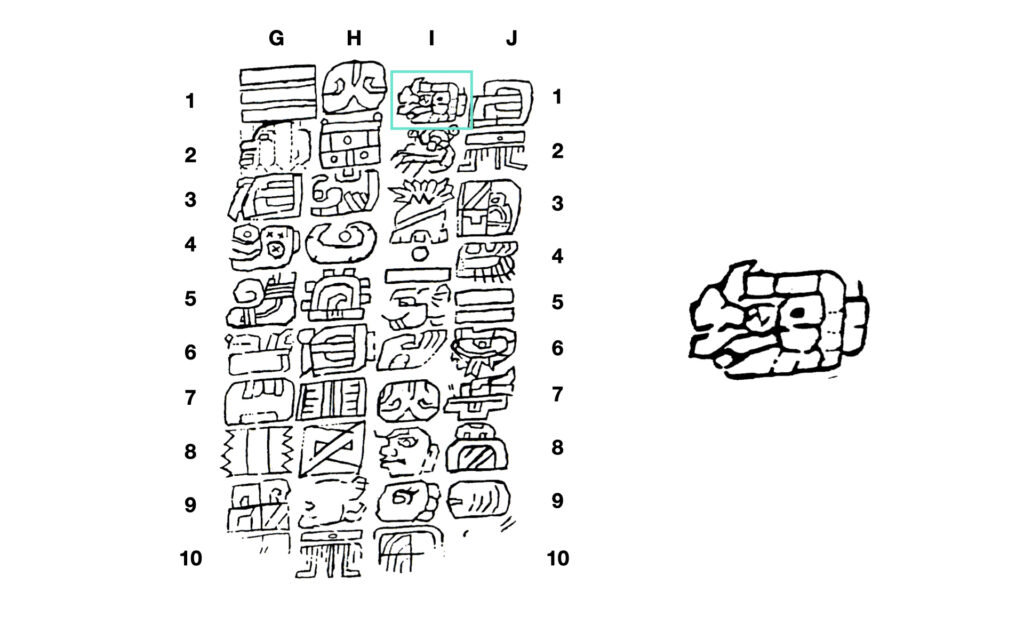 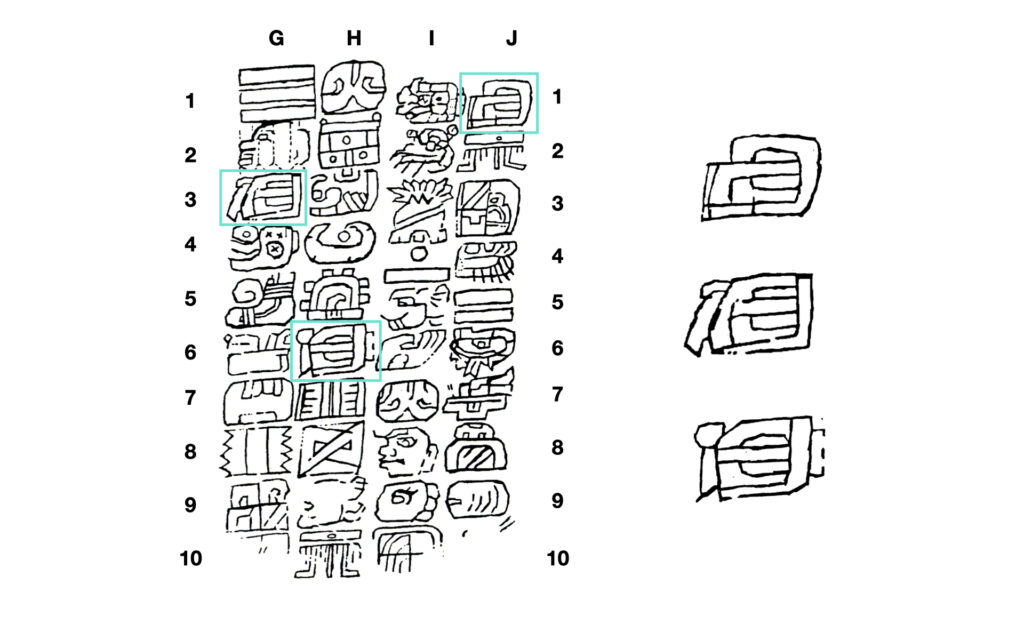 Indeed, SKULL signs, likely depicting skull-shaped beads that serve as components of beads assemblages, are well known graphemes with the value ʔu in Classic Mayan (Figure 6). Nevertheless, in Classic Mayan such ʔu allograms are typically found during the Late Classic period, not earlier. For now, I propose based on its distribution that it could correspond to a ʔu syllabogram. 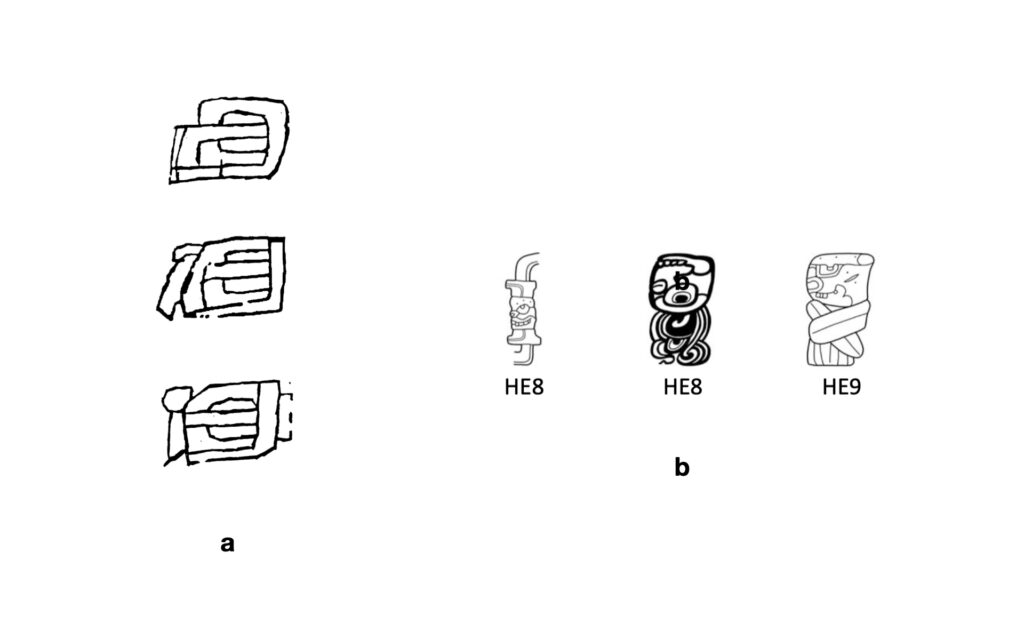 Allowing for such a possibility, and noting that the sign at I2 could correspond to a VULTURE sign (Figure 7), in Mora-Marín (2005:77) I further suggested that the Kaminaljuyu Stela 10 passage from J1-I2 could spell ʔu-ʔUSIJ, and thus constitute a spelling of ʔusiij ‘vulture’. 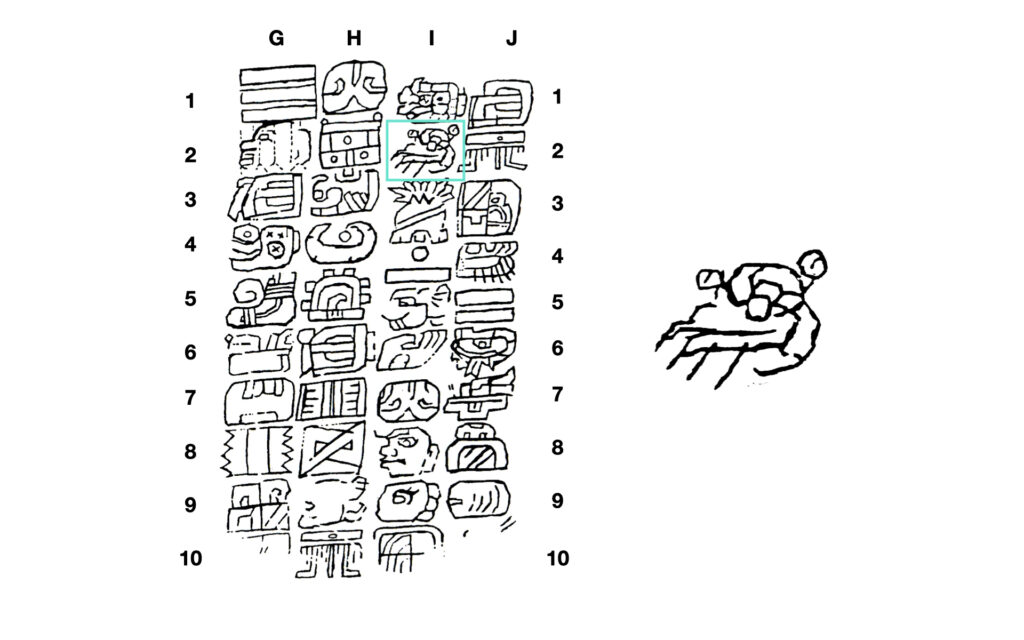 Figure 8. a) I2 on Kaminaljuyu Stela 10. b) Full-figure VULTURE sign (with value k’i) on incised Early Classic bowl from Caracol. Drawing of the Caracol incised bowl glyph block (yu-k’i-b’i) by Dana Moot II, used with permission of that author. 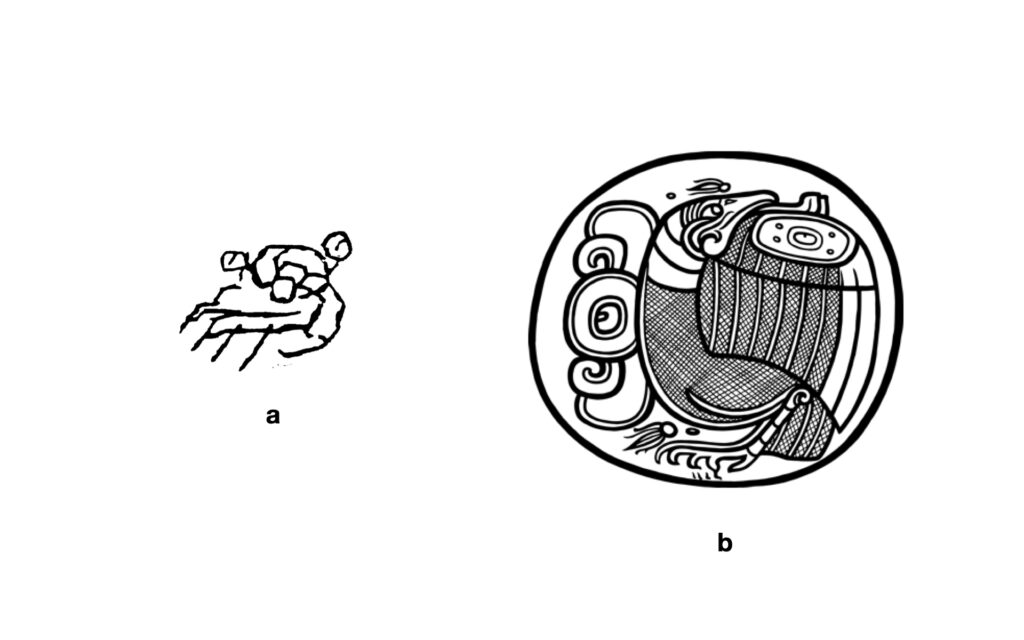 The sign that follows, at J2, appears at least once more on the bottom panel at H10, and possibly once in the top panel at E3, as seen in Figure 9. In Mora-Marín (2005) I did not say very much about the possible function of this sign in the passage from I1-J3, but I now think it is worth saying more about it at this time. 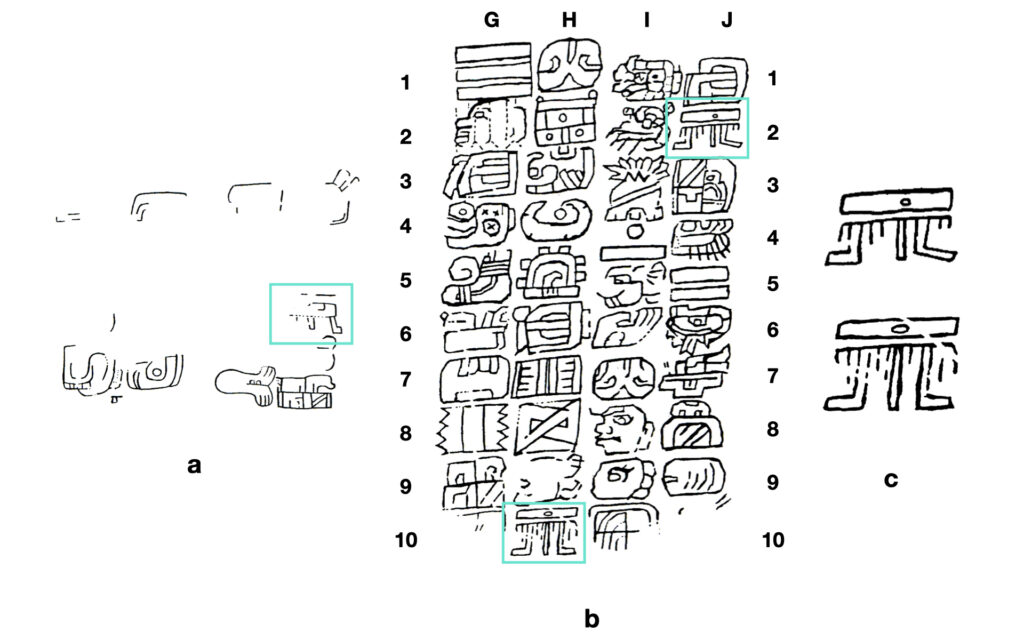 As already noted by Macri (1991), the sign occurring at H10/J2 (Figures 10a–b) on Stela 10 match, visually, sign MS101 in Isthmian/Epi-Olmec writing (Figure 10c), proposed by Justeson and Kaufman (1993) to be a syllabogram si. It also closely resembles a sign that appears on a fragmented jade plaque in the Dumbarton Oaks collection (http://museum.doaks.org/objects-1/info/22541), although in this context (Figure 10d) it has typically been identified with the Mayan syllabogram ma. 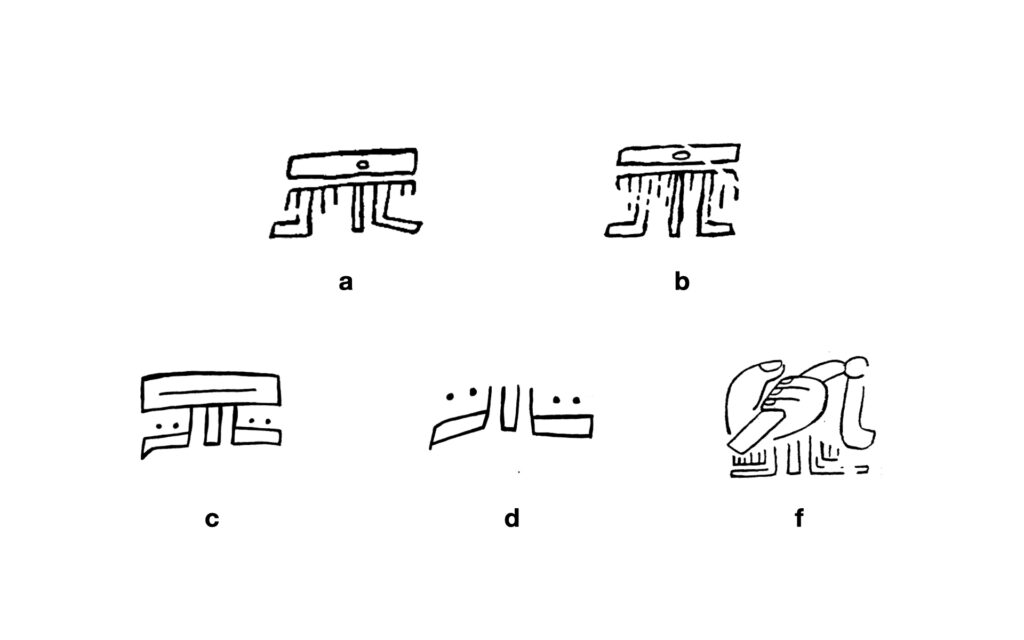 In my paper from 2005 I had suggested that several passages from the text could be analyzed as consistent with the orthography and content of Classic Mayan texts. As such, there was no place to bring Epi-Olmec into the narrative. However, in Mora-Marín (2015), a presentation on the conventions of early Mayan writing, I offered this as a possible example of script transfer: if the sign at H10 and J2 had the same value on Stela 10 as in Epi-Olmec writing, a spelling ʔu-ʔUSIJ-si might be obtained, essentially a (mostly) complete logosyllabic spelling of ʔusiij ‘vulture’. This is of course a very tentative identification, but worth testing. This then is the main idea of the present note, the possibility that the text on Kaminaljuyu Stela 10 may in fact employ both Mayan and Epi-Olmec grapheme values, not just Mayan and Epi-Olmec graphemes.

In my analysis, this term appears in the name phrase of the individual portrayed on the monument. The individual is portrayed in the guise of the Rain God, and appears to be staying atop a platform or mountain, although only one tiny fragment of such motif survives on the fragmented monument. In any case, the sign at I3 (Figure 11) is the sign that I identified as a MOUNTAIN sign, and the sign at J3 is the sign I identified as a LORD/RULER sign (Mora-Marín 2005:76, Figs. 10 and 11). 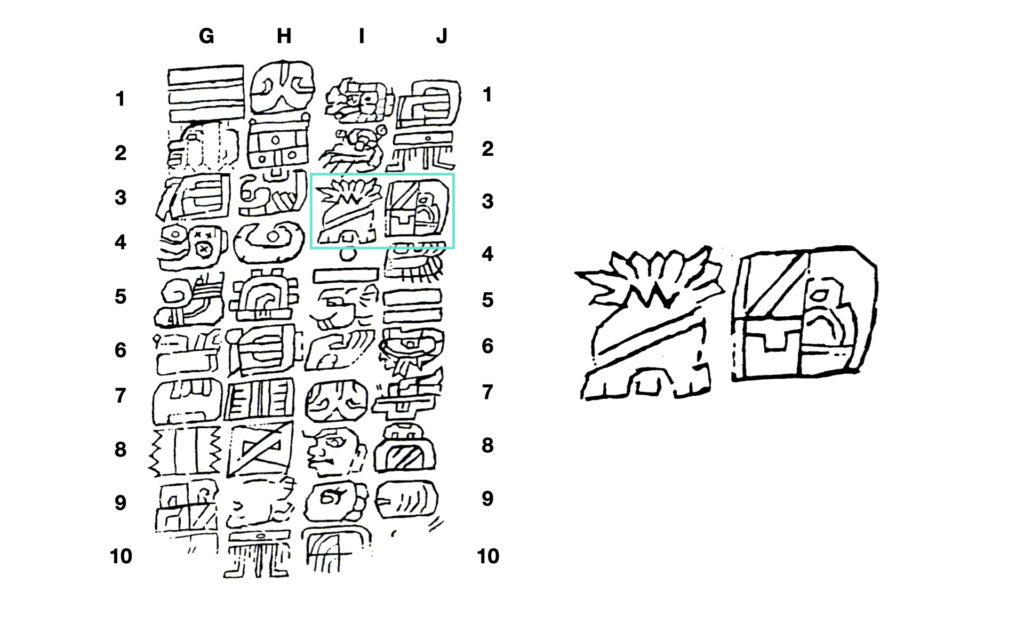 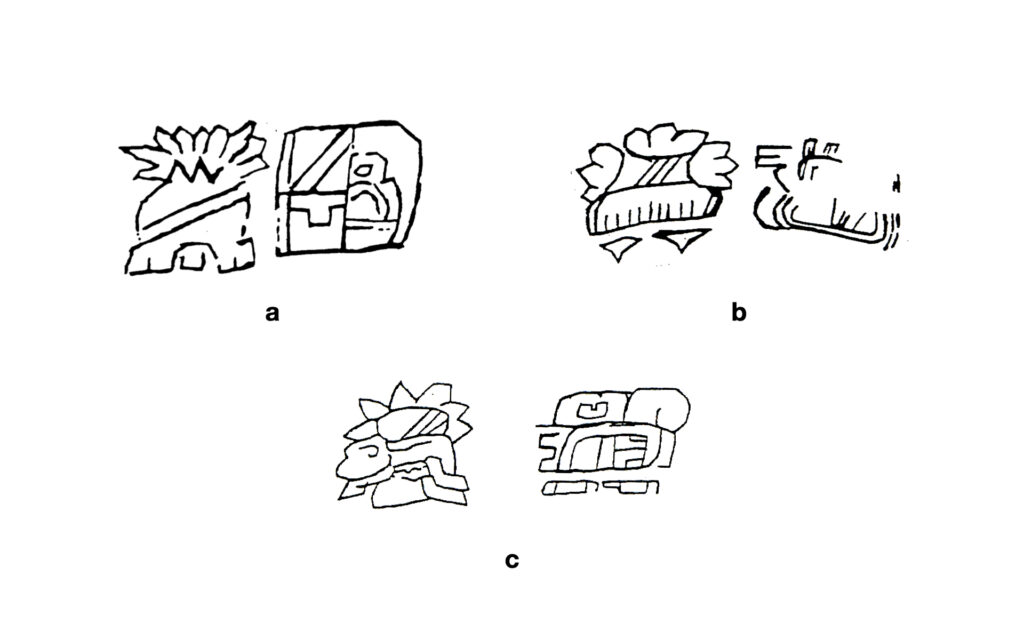 The entire name phrase in question would begin at I1 and end at J3 (Figure 13). At I1 is found the RAIN.GOD sign. From J1–J2 is found the plausible ʔu-ʔUSIJ-si spelling. Then, at I3–J3 is the title MOUNTAIN-LORD. Thus, the entire phrase could be read as ‘Rain God Vulture Mountain Lord’ or as a non-verbal clause ‘Vulture Mountain Lord is the Rain God’. In Classic texts, the Mountain Lord title is occasionally preceded by the common term for a particular type of animal, such as moʔ ‘macaw’ or hix ‘feline (species)’. Also, although not obviously followed by the term ʔajaw, there are examples of the phrase ʔusij witz, often with the two logograms conflated, as on Bonampak Sculptured Stone 5. 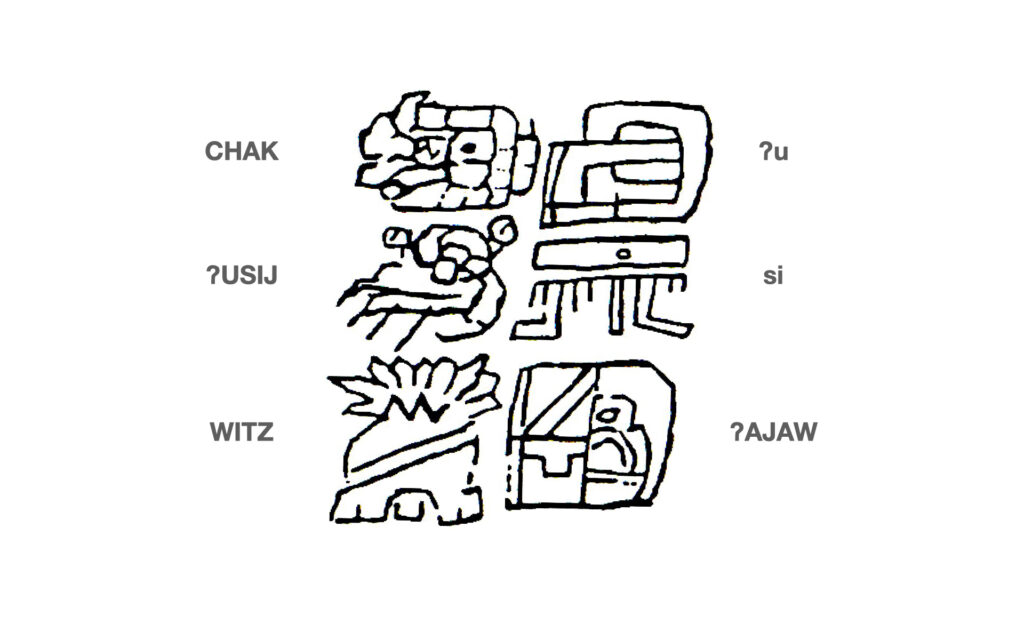 Finally, it is worth entertaining the implications of the proposed reading of the term ʔusiij ‘vulture’. First, as already noted, if the sign at H10/J2 is indeed a syllabogram si, it would mean that the scribes at Kaminaljuyu were likely employing some Epi-Olmec signs with their Epi-Olmec values, and similarly, that they were doing the same for Mayan signs (cf. Mora-Marín 2005 for discussion of likely signs with Mayan values on this monument).

Second, ʔusiij ‘vulture’ constitutes an example of a widely distributed term of unclear origin, a Wanderwort, according to Kaufman (2020:235). But in this particular phonological shape it is present only in Mayan languages. More specifically, Kaufman with Justeson (2003:621) reconstruct it as *ʔusiij ~ *ʔuseej to “Greater Q’anjob’alan plus,” with the plus including Ch’orti’ usij ‘black vulture’ (cf. Hull 2016:469). Interestingly, as observed by Hopkins et al. (2011), Sapper’s (1907:450) word list records <usijl> for the Tumbalá dialect of Ch’ol, and <tyahol> for the Tila dialect. In fact, the term also appears in Tzeltal, at least in the variety attested in Copanaguastla during the 16c, as usij ‘zopilote (ave), posiblemente el zopilote rey’ (Polian 2015:672), though in other Tzeltal varieties it is attested as aja’us (2015:15), which Polian analyzes as ajaw ‘deidad, entidad sobrenatural, guardián’ (2015:15) + (‘)us ‘mosco, mosquito, mosca’ (2015:672). Of course, the term also appears in Epigraphic Mayan as ʔu-si-ja and ʔu-VULTURE, for example.

Speculating a bit more, if the original form of the term had been *ʔuseej, it is possible that the form *ʔusiij could be an example of the Ch’olan *ee > ii > i shift, which then spread, under the influence of Ch’olan speakers, into, Tzeltal and Mocho’. The fact that Mocho’ is the only Greater Q’anjob’alan language that exhibits the vowel /ii/ in this term, with Tojol-ab’al, Chuj, and Tuzanteko all showing /e/, and the fact that Ch’orti’ and Ch’ol exhibit /i/, could support such a scenario. If this scenario holds, then Kaminaljuyu Stela 10 may exhibit evidence of the shift of *ee > ii > i by ca. 100 BCE at the latest.

It is fun to speculate.

Hopkins, Nicholas A., J. Kathryn Josserand, and Ausencio Cruz Guzmán. 2011. A historical dictionary of Chol (Mayan): The lexical sources from 1789 to 1935. http://www.famsi.org/mayawriting/dictionary/hopkins/dictionaryChol.html (1 January 2020).

—–. 2015. The Social and Cultural Context of Early Mayan Writing and the Development of Logographic and Logosyllabic Spelling Practices. Paper presented at the International Conference on The Chinese Writing System and Its Dialogue with Sumerian, Egyptian, and Mesoamerican Writing Systems at Rutgers University, May 29-31, 2015.