At the 104th meetings of the American Anthropological Association in 2005, I, together with Nicholas Hopkins and Kathryn Josserand, presented a paper on the linguistic affiliation(s) of Classic Mayan texts (Mora-Marín et al. 2005). That presentation gave rise to a paper, Mora-Marín et al. (2009), included in the 2009 volume on The Ch’orti’ Area: Past and Present, edited by Brent Metz, Cameron McNeill, and Kerry Hull. In the presentation, my co-presenters and I briefly mentioned an observation that I had circulated the previous year as part of a longer and more comprehensive paper aimed to test the various alternatives for the languages of Classic Mayan texts (Mora-Marín 2004). (Such paper eventually morphed into Mora-Marín 2009.) That observation pertained to the possibility that Tikal Stela 10 exhibits an early example, perhaps the earliest attested example, of the proto-Ch’olan suffix *-wän, which replaced the earlier suffix *-laj ‘intransitivizer of positionals’ in most of the Ch’olan varieties (Ch’olti’, Ch’orti’, Yokot’an). In their presentation, Law et al. (2005) highlighted the fact that the glyph block in question was mostly obliterated, and that not enough detail had survived to support a clear identification. Later, in the edited volume that resulted from the conference, Mora-Marín et al. (2009:22) tentatively suggested that *-wän may be attested on Tikal Stela 10 as early as 527 CE. In their corresponding volume chapter, Law et al. (2009) further argued against such possibility.

Since that time, new evidence has emerged that makes it worthwhile to revisit this issue. Mora-Marín (2017, 2019) has shown, by means of a more comprehensive and quantitative study of the distribution of -laj and -wän suffixes in the inscriptions, that by the time -wän makes its appearance during the mid-seventh century (starting around 667 CE), the two suffixes were already entangled in a more or less even distribution in general (though the situation varied significantly on a site-by-site basis). Such an even distribution is suggestive of a significant amount of time prior to the mid-seventh century during which the -wän suffix must have been not only innovated, but begun to spread, until achieving a more or less equal footing with respect to -laj. Clearly, such prior innovation and spread took place primarily in speech, before scribes began to more systematically render the -wän suffix in writing. Such lag between its spread and embedding in speech, on the one hand, and its acceptance in written texts, on the other, would suggest too that -wän may have initially been stigmatized, not considered worthy of official contexts such as public inscriptions detailing historical events. But it also suggests that it may have been occasionally rendered in writing, and that it should not be too surprising that a text or two might attest to such suffix prior to 667 CE. Perhaps Tikal Stela 10 is evidence of just that, an early scribe’s sociolinguistic experimentation.

The case at had is found on glyph block E8 of Tikal Stela 10, seen in Figure 2a. As observed by Mora-Marín (2004), Mora-Marín et al. (2005, 2009), and Law et al. (2005, 2009), the glyph block is mostly missing due to major damage. Perhaps 30–40% of the entire block survives. This is definitely not a promising start. However, its presence before the expression ta-ʔAJAW-wa for tä ʔajaw ‘as king’ or tä ʔajaw-al ‘in kingship’ strongly supports the idea that glyph block E8 constitutes an accession statement, and the drawings by William Coe (Figure 2b) and Linda Schele (Figure 2c) are consistent with an expression such as CHUM[mu]-*wa-ni, where the syllabogram T130 wa would have to be inferred as likely present originally in the now missing portion of the glyph block, although it is also possible that the expression may have been spelled without it, simply as CHUM[mu]-ni (cf. Caracol B16-sub Stucco at p13, Palenque Temple of Inscriptions East Panel at S2). 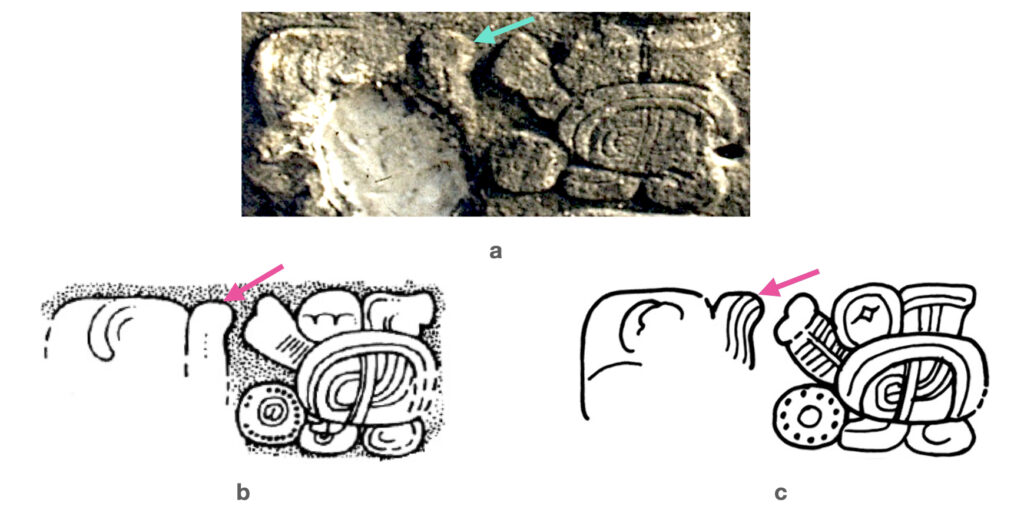 This possibility can be tested paleographically, at least if one starts from the assumption that the accession glyph in question is in fact T644 CHUM, and therefore that the most likely suffixing would have been either -laj or -wän. Doing so would mean pitting T181 ja, typically present at the end of the spelling of the -laj suffix, against T116 ni, typically present at the end of the spelling of the -wän suffix. The typical form of T181 ja in Early Classic texts at Tikal is, first of all, partial: it shows half of the whole sign. Second, it shows a pronounced curvature with the top, pointed element oriented toward the center of the glyph block in which it appears. The examples in Figure 3, both from Tikal Stela 10 itself, illustrate this fact. 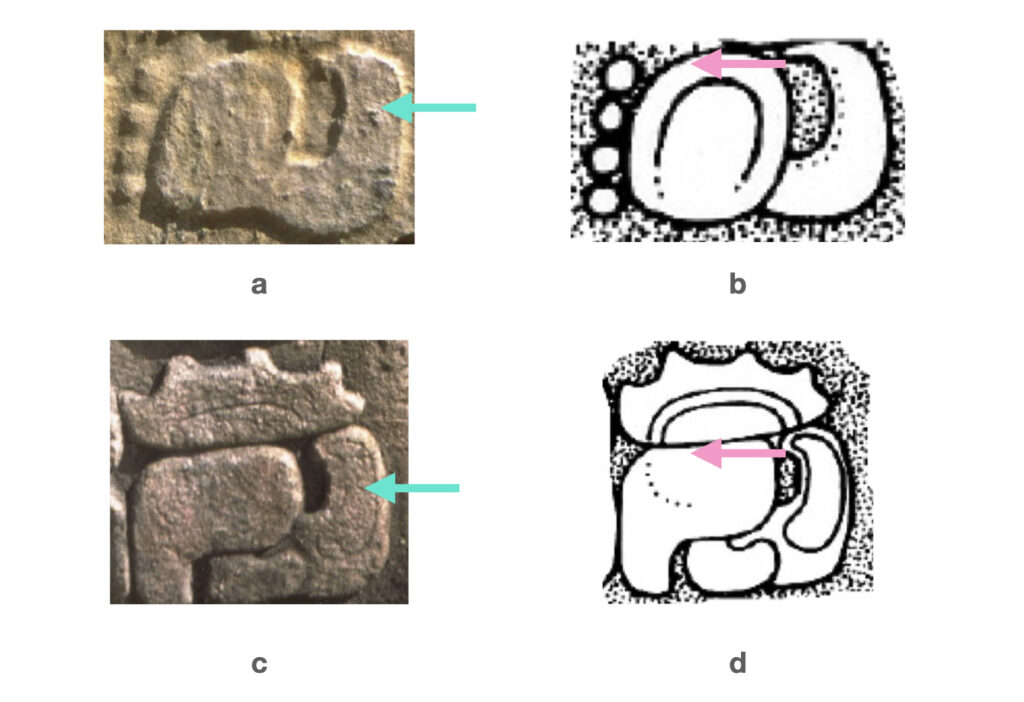 This can be contrasted with the evidence for the shape of T116 ni in the Early Classic texts of Tikal: as seen in Figure 4, T116 ni typically ends in a tip that points outward, away from the glyph block’s center, rather than inward. 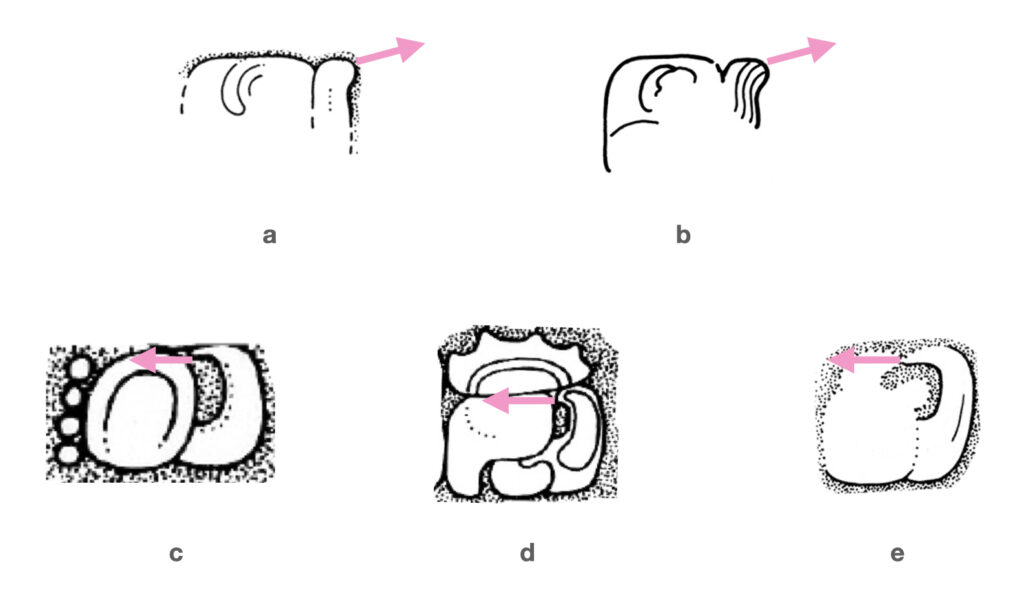 To conclude this blog, the evidence from Tikal Stela 10 regarding the possible presence of the suffix *-wän is, well, inconclusive. However, what little remains of the grapheme that would be spelling part of such suffix, it can be said that it is more consistent with T116 ni than with T181 ja, given the traits these two graphemes exhibited during the Early Classic period, and in particular, Early Classic Tikal.

But the presence of this suffix at Tikal well over a century prior to its next appearance at sites like Copan, Palenque, etc., would not be entirely unexpected, given the evidence presented in Mora-Marín (2017, 2019) for sociolinguistic variation, which indicates that once -wän made its appearance during the mid-seventh century, it was already as equally likely to appear in the next text as -laj, implying that the two were already in a type of equilibrium or complementary distribution of the type common of sociolinguistic markers, and also implying that -wän was present in speech for a significant period of time prior to its becoming entrenched in written texts, for not only must it have been innovated, but it must have experienced a process of spread from one environment to another to another, prior to achieving its balanced distribution with respect to -laj. In this light, future findings of -wän prior to the mid-seventh century should be expected, and the possibility of its presence on Tikal Stela 10 should not be considered anomalous.

Mora-Marín, David, Nicholas Hopkins, and Kathryn Josserand. 2005. The Linguistic Affiliation of Classic Lowland Mayan Writing and the Historical Sociolinguistic Geography of the Mayan Lowlands. Paper presented in the American Anthropological Association session on “The Ch’orti’ Area: Past and Present on the Southeastern Maya Periphery,” organized by Brent E. Metz and Cameron L. McNeil.

—–. 2009. The Linguistic Affiliation of Classic Lowland Mayan Writing and the Historical Sociolinguistic Geography of the Mayan Lowlands. In The Ch’orti’ Area: Past and Present on the Southeastern Maya Periphery, edited by Brent E. Metz, Cameron L. McNeil, and Kerry Hull, pp. 15–28. University Press of Florida.