A Possible Collocation Abbreviation Function of the Duplication Diacritic

This note deals with the duplication diacritic or doubler of Epigraphic Mayan, cataloged by Looper et al. (2022) as 22A, with at least 133 occurrences in the Maya Hieroglyphic Database (Looper and Macri 1991-2022), henceforth MHD. It was originally identified and described by David Stuart in 1990 (Stuart 2014[1990]), who defined its basic function as doubling or duplicating the reading of a syllabogram, as in the very common spellings 2ka-wa, instead of ka-ka-wa, for käkäw ‘cacao’, or the occasional spelling 2k’u instead of k’u-k’u for k’uk’ ‘quetzal’, as seen in Figure 1. 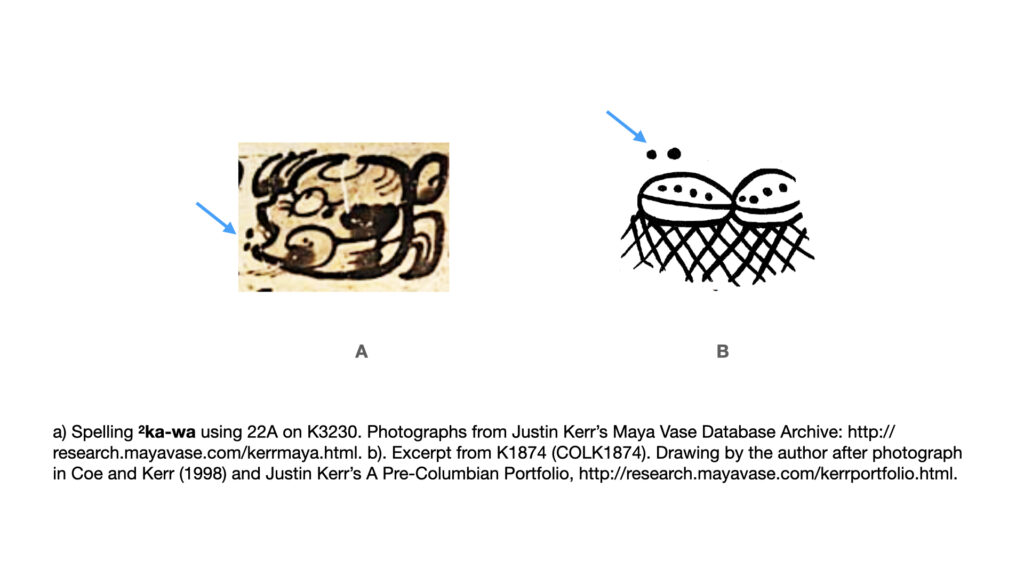 This function is well established, and universally accepted. The diacritic’s doubling function has been incorporated into basic introductions to the Mayan writing since then (e.g. Harris and Stearns 1992, 1997; Harris 1993, 1994; Kettunen and Helmke 2020). The most detailed scholarly discussions of the diacritic are those by Stuart (2014), Stuart and Houston (1994), and most significantly, Zender (1999:102-130). Here I will focus on a single question, whether 22A could apply to logograms, in addition to syllabograms, and if so, with what function.

Although Stuart (2014[1990]) and Stuart and Houston (1994) proposed that 22A could apply to logograms, and that in such cases its function was to double their reading, same as for syllabograms, the examples that those authors were referring to were actually cases of syllabograms, such as ʔu and ʔa, spelling grammatical morphemes, such as the person agreement markers u- ‘third person singular ergative/possessive’ and a- ‘second person singular ergative/possessive’. From the late 1970s through the early 1990s, many authors analyzed such syllabograms as functioning logographically when representing grammatical morphemes, and in such cases they were often transcribed in uppercase letters, same as logograms (e.g. U- and A-). However, from a purely orthographic point of view, this is unnecessary: a simple, syllabographic spelling strategy is sufficient to account for the uses of ʔu and ʔa when they spell person agreement markers. In fact, Zender (1999), who carried out the most comprehensive discussion of the duplication diacritic to date, concluded that it applied exclusive to syllabograms. Although the notion that syllabograms could function logographically to spell grammatical morphemes was later revived as the Morphosyllable Hypothesis (Houston et al. 2001), a simple duplication function, the same type of function that applies to syllabograms, is enough to explain cases where 22A is used with syllabograms spelling grammatical morphemes. The only difference lies, in some cases, in whether the duplication action is meant to be sequential (e.g. 2li for -(V)l-il ‘abstractivizer or 2le for -(V)l-el ‘abstractivizer’) or non-sequential (e.g. 2ʔu-KAB’-CH’EN for u-kab’ u-ch’en ‘his land, his well/cave’). I would therefore define sequential duplication and non-sequential duplication as subtypes of duplication, but both applicable to syllabograms.

More recently, Kettunen and Helmke (2020) and Prager (2020) have suggested that 22A could be affixed to logographic signs representing roots with C1VC1 shapes, such as 2TZUTZ for tzutz ‘to finish’ (Stuart 2001; 2014[1990]) and 2K’AK’ for k’ahk’ ‘fire’. 22A also applies to a sign cataloged by Looper et al. (2022) as ZRJ, resembling a ball. Kettunen and Helmke (2020:20) have argued for a value K’IK’/CH’ICH’ for ZRJ, but do not present the evidence for it. It can be assumed that those authors were thinking of Mayan languages in which the word for ‘blood’ may also bear the polysemy ‘rubber (ball)’. One may cite the comparative Mayan evidence (Kaufman with Justeson 2003:322–324) for pM *kik’ ‘blood’, which in some Eastern Mayan languages (Kaqchikel, Poqomam, Q’eqchi’, Mam) and at least one Western Maya language (Tuzantek) may also bear the meaning ‘rubber’ in addition to ‘blood’. Thus, the languages where a ‘blood; rubber’ polysemy applies are Central Mayan languages. Prager (2020:7), for his part, presents tantalizing evidence in favor of a value KUK ‘bundle, textile; roll up, wrap up’ for ZRJ. Whatever the reading of ZRJ, the best analysis of the use of 22A with TZUTZ and K’AK’ is in fact that scribes were using it to mark logograms spelling roots with C1VC1 shapes. Such C1VC1-shape-marking function, attested in at least 14 examples in the MHD, likely was derived from 22A’s original function of duplicating syllabograms give that such function always yields /C1VC1/ sequences and is attested much earlier than the earliest examples of 22A with TZUTZ and K’AK’.

There is another instance in which 22A appears to apply to logograms that has not been properly accounted for to date. I suspect this what Stuart and Houston (1994:46, footnote 13) were alluding to when they stated: “We do not yet understand why some spellings use this convention. Perhaps they signal a particular spelling when two are possible: chi-K’IN in place of K’IN-chi, or k’a-k’a instead of BUTS’, respectively.” Regarding K’AK’, it now seems more likely that 22A was extended analogically to optionally marking logograms with roots with C1VC1 shapes, as there is no strong evidence for a value B’UTZ’ for b’utz’ ‘smoke’ for this logogram. Regarding the other case, unfortunately, Stuart and Houston did not provide the examples of either chi-K’IN or K’IN-chi to which they were referring, but it is very likely that one such example, perhaps the only example, was found on K2295. In the Primary Standard Sequence (PSS) text present on this vase, one finds 2chi[K’IN] (Figure 2A) at the very end of the text, immediately before the Initial Sign Collocation that starts the text. It is likely that this is a spelling of k’ihnich ‘radiant’. In fact, the 2chi[K’IN] collocation is immediately preceded by ʔaj-pi-tzi.: the title sequence ʔaj-pi-tzi K’INICH is actually attested elsewhere, such as Uxul Southern Stairway, Panel 03 (cf. MHD objabbr UXLSSP3), and was one of the titles of K’inich Kan Bahlam II from Tonina. This 2chi[K’IN] spelling can be thought of as an abbreviation: using the MHD, it can be shown that there exist more logosyllabic spellings of this term that include T116 ni, or both T116 ni and T671 chi (Figure 2B), approximately 120, than cases where T116 ni was omitted and only chi is present, with 17 cases. The abbreviation was likely motivated by the placement of this collocation at the end of the text, where there was no more room. Consequently, it seems that 22A functioned in this case as a punctuation device, to indicate the abbreviation of a collocation, in this case leaving out a common syllabogram (ni), much in the same way a period are also used to abbreviate in writing systems derived from Greek and Latin today (e.g. Dr., Prof., etc.). 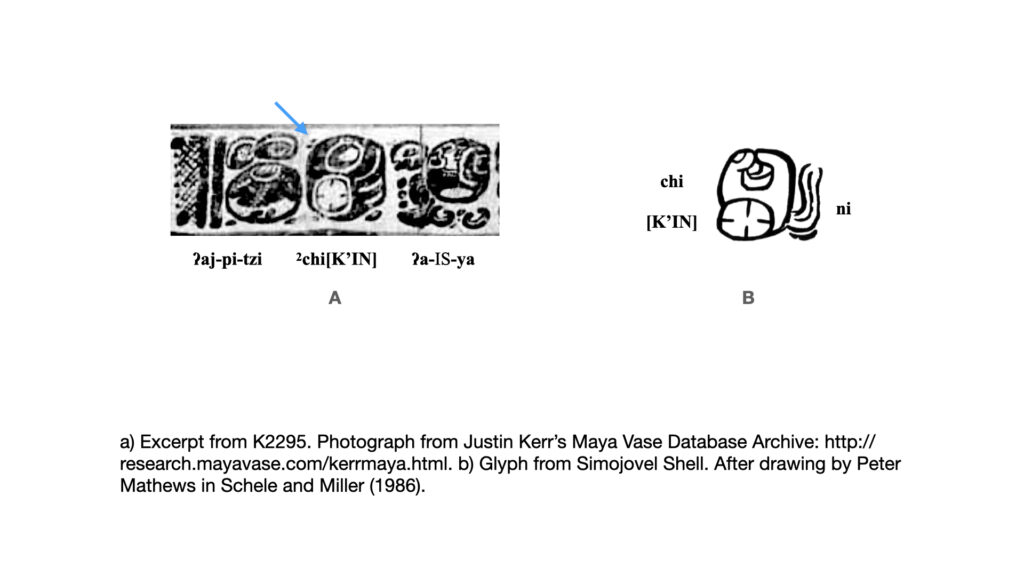 Another instance of this abbreviation function of 22A may be found on K1670. The PSS text on this vase begins with the yu-k’i-b’i collocation for y-uk’-ib’ ‘his/her cup’, and ends in a spelling of the common title K’UHUL-cha-TAN-WINIK, as seen in Figure 3A, such as the compacted and extended versions seen in Figures 3B-C. This title of course is linked to a site of unknown location, whose name is often transliterated Chatahn, but thought to have originated in the Mirador Basin (Boot 2005; Velásquez García y García Barrios 2018), and may correspond to the Preclassic site of Tintal (Hansen et al. 2006). On K1670, the title appears at the end of the PSS text on the vessel’s rim as K’UHUL-cha-2TAN (Figure 3A), lacking the characteristic WINIK logogram. Here, 22A is applied to the logogram TAN for tahn ‘chest’, which is immediately followed by the possessed drinking cup expression that begins the PSS text. K1670 contains two glyphic columns as well. The structure of these columns is difficult to assess, but each column appears to repeat part of this title: one shows TAN-na WINIK (Figure 3D), while the other shows 2TAN 2TAN (Figure 3E) at the top, and 2TAN-na TAN-na (Figure 3F) at the bottom. Despite the irregular structure of the two glyphic columns, the pattern holds: when 22A is present, WINIK is absent, and when 22A is absent, WINIK is present. Once again, 22A applies to a logogram and indicates that something that is typically present (another logogram in this case) has been left out, omitted, and thus, the typical collocation is abbreviated. In essence, this is what happens when 22A indicates the need to double the reading of a syllabogram: it is a way of pointing out that something is missing, an additional rendering of an already present syllabogram. The abbreviation-marking function proposed here, then, likely was also an analogical extension from the basic duplication function of the diacritic. 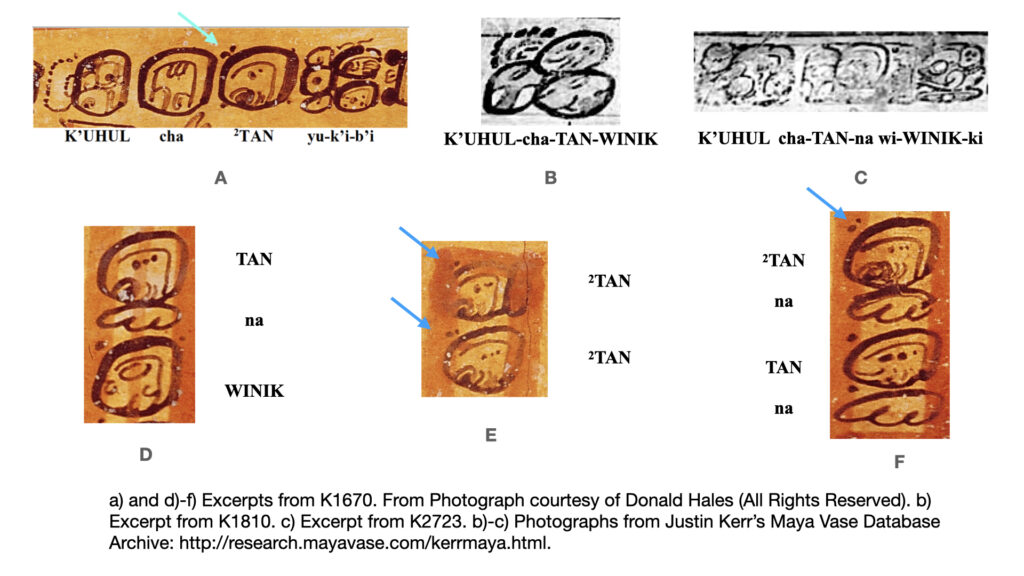 There are two more examples that support this abbreviation function. These involve the child-of-father expression, and specifically two cases where 22A is placed between K’AK’ for k’ahk’ ‘fire’ and the T535 (Capped Ajaw) sign, as seen in Figures 4A-B. In this collocation, T535/ZA3 (Capped Ajaw) and T533/ZA1 (Regular Ajaw) may co-occur (Figure 4C). When this happens, T535 always precedes T533. The 22A diacritic only appears in two cases, the two examples already noted, and in both cases it is T533 that is seemingly absent from the collocation. 22A does not always appear in instances in which T533 is absent; as has already been explained, 22A is optional. But both cases where it does appear are cases where T533 has been omitted. In principle, examples like those in Figures 4A-B (and similar examples lacking the optional 22A), could be argued to be instances in which T533, Regular Ajaw, has been infixed within T535, Capped Ajaw, resulting in the appearance that only the Capped Ajaw is present. Thus, 22A could be functioning, in the rare occasion when it is present in the child-of-father collocation, to indicate that something is missing, specifically, T533, or at the very least not obvious.

To conclude, 22A, the duplication diacritic, may function to indicate that a collocation has been abbreviated (and thus serve as a punctuation device). The missing component may be a common or expected logogram, or possibly a common syllabogram. Thus, in such cases, 22A appears to function at the supra-graphemic level, at the level of the collocation, rather than at the graphemic level, specifically, applying to a logogram or syllabogram. This is yet another function, a fourth function, of 22A, after the ones already discussed, yielding a four-way functional classification: sequential duplication, non-sequential duplication, C1VC1-shape marking, and now, abbreviation. And all functions are likely related: the sequential duplication function can be argued to be the basis, through different types of reanalysis, for the other three functions.

Stuart, David. 2001. A Reading of the “Completion Hand” as TZUTZ. Research Reports on Ancient Maya Writing, No. 49. Center for Maya Research, Washington, D.C.