The Iconographic Origin of the T533/AM1 ʔAJAW ‘Lord, Ruler’ Logogram

This note focuses on the origin and historical development of T533/AM1, seen in Figure 1. It is based on a more extensive manuscript written in 2005 (Mora-Marín 2005a) and circulated by email among a few scholars, some of whom offered valuable feedback at the time (e.g. Julia Guernsey, David Freidel, Mary Pohl), but it was never submitted for publication. Here I am rescuing some of the key ideas from that manuscript. 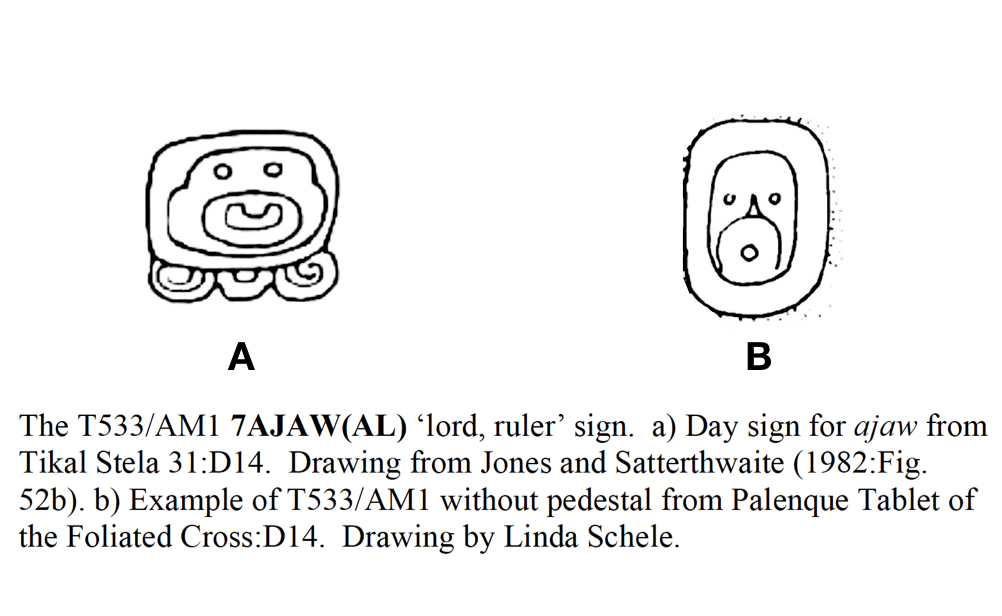 Mayan writing uses several distinct signs as allograms (variant signs with the same value) to represent the root ʔaajaaw ‘lord, ruler’ and some of its derivations[1]: T533/AM1, T1000d/PT7, and T168(:518)/2M1. Though in principle equivalent, these logograms are typically found in a rather loose complementary distribution: T533 is mostly relegated to calendrical contexts, as a sign spelling the ritual day name ‘lord’, but was on relatively rare occasions employed as a title; T1000d is common both as a day sign and a title; and T168(:518) is more strictly confined for use in titles phrases of individuals. 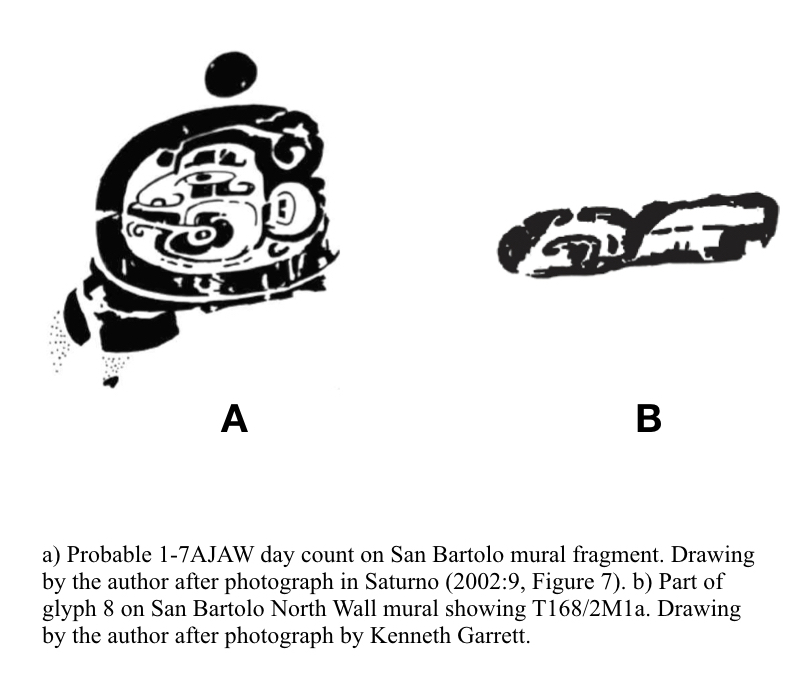 Prior to such examples, though, at least one non-calendrical use of T533, functioning as part of a title, appears on Kaminaljuyu Stela/Monument 10 (Figure 3), dated to ca. 400-200 BCE (Shook and Popenoe de Hatch 1999) or 100 BCE (Inomata and Henderson 2016), as described by Mora-Marín (2001, 2005, 2008, 2016). This example shows a juxtaposition of an early (rotated) form of T518/2M1b, which is in origin a form of the day sign REED, and T533 ʔAJAW. I have suggested previously that the REED sign in question may have functioned as a phonetic complement to the T533 logogram, based on Proto-Mayan *ʔaaj ‘reed’ (Mora-Marín 2005:76, 2016:43; cf. Kaufman with Justeson 2003:1157), resulting in a spelling ʔaj-ʔAJAW for *ʔaajaaw ‘lord, ruler’. (This partly phonetic spelling would support a Mayan affiliation for the language represented in the Kaminaljuyu script, as does also the possible 10-chi-SNAKE expression on the same inscription as a spelling of the day count 10-Chijchan (Greater Tzeltalan *chihj=chaan).) Thus, the use of T533 as a logogram ʔAJAW can be established already during the Late Preclassic period in the broader region of use of the script. 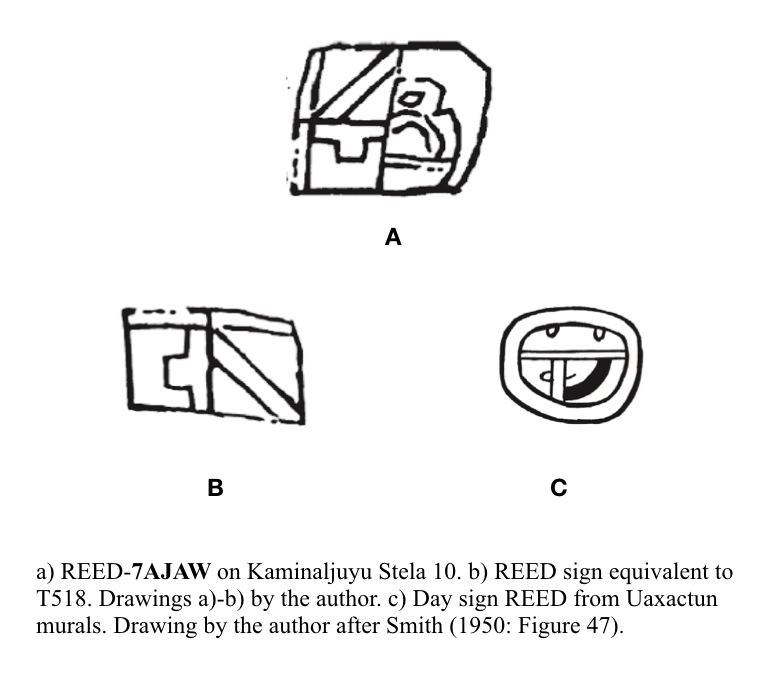 The question that I address now is the iconographic motivation of T533 ʔAJAW. I propose that it depicts the face of a ritual specialist in the act of howling. Stross and Kerr (1990) presented an iconographic argument for howling and whistling personages associated with the use of ritual hallucinogens as a pan-Mesoamerican theme. The howling face theme (Figure 4) they describe may be indicative of the ritual practices of blowing air to imbue an object with ‘breath’, and howling common as a result of the use of hallucinogens, consumed to achieve a trance state and communicate with, or travel to the supernatural realm (Stross and Kerr 1990). To the modern examples by Stross and Kerr (Figures 4a-b), from Guerrero and Michoacan, respectively, I have added a couple of Pre-Columbian examples (Figures 4c-d), one of them being the O’Boyle ceramic mask (Late Preclassic or Early Classic) and the upper torso of a hollow ceramic figurine from the Early Classic Peten. The howling expression in these artifacts is of course very similar to the expression seen on T533. 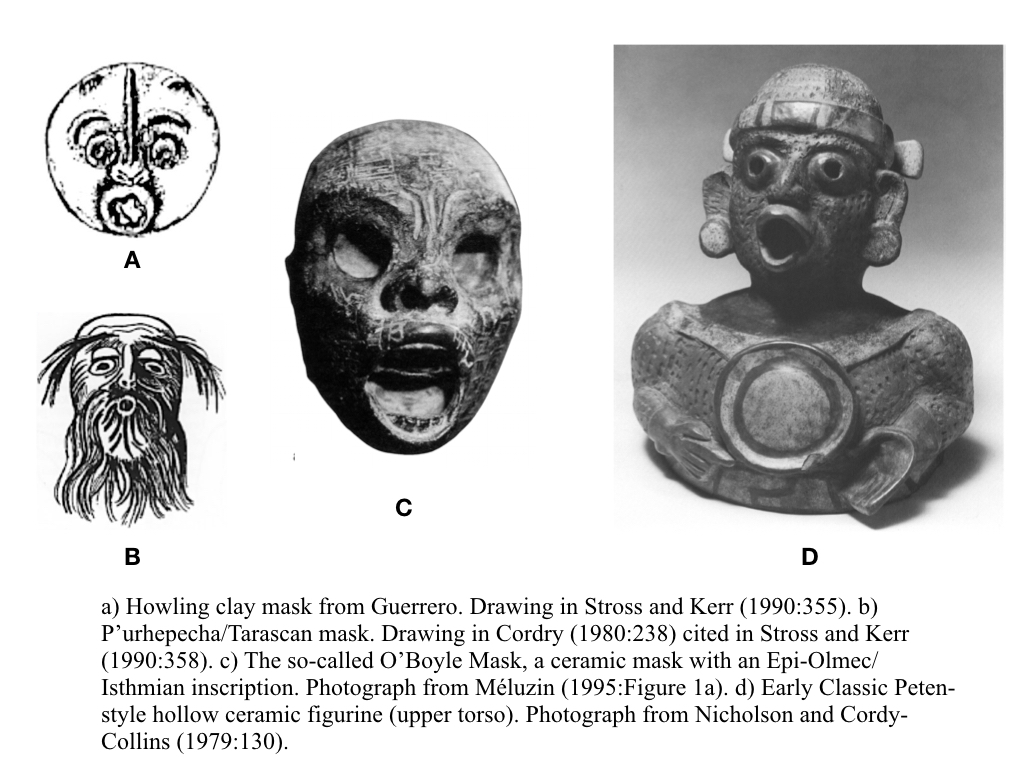 This howling face theme can be traced back to the Late Preclassic potbelly sculpture tradition spanning much of the Isthmus of Tehuantepec and the Pacific Piedmont and highlands of Guatemala. The potbelly tradition has been described by a number of scholars, among them Navarrete and Hernández (2000) and Guernsey (2010). Figure 5 provides two similar examples from Tiltepec, Chiapas, and San Juan Sacatepequez, Guatemala, respectively. 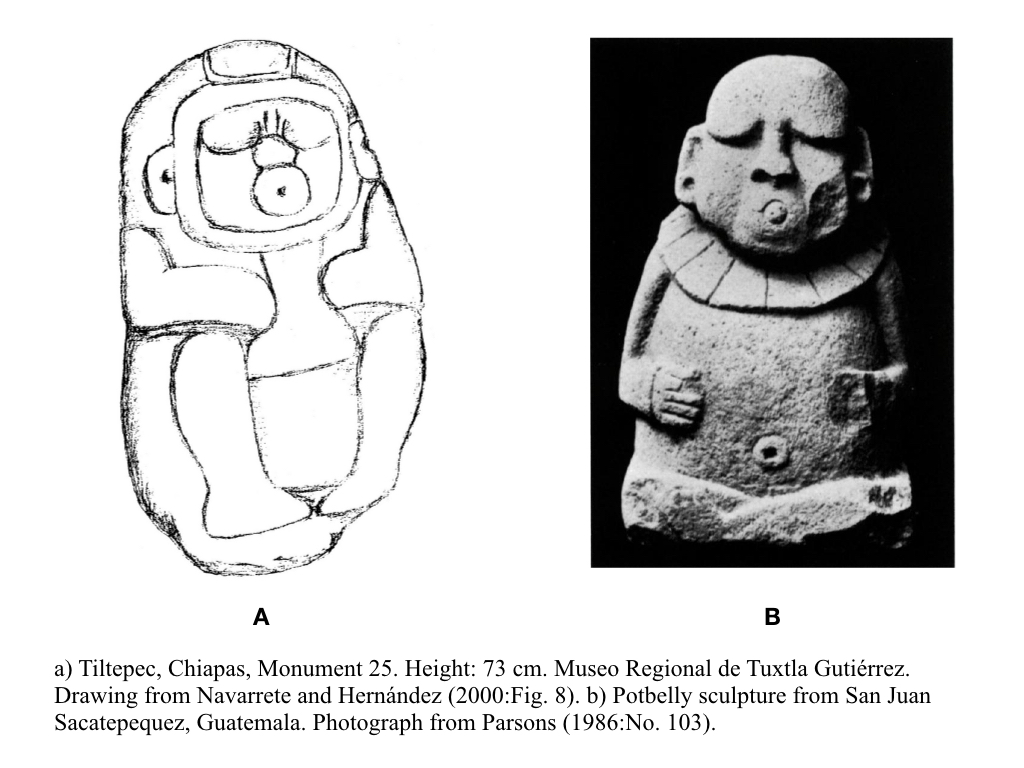 Of special interest are the cases from Tiltepec, Chiapas, which have been dated to ca. 500-200 BCE by Navarrete and Hernández (2000), seen Figure 6, and which I argue here bear evidence of possible writing: a glyph-like sign “affixed” to the faces of pot-bellied individuals. In several examples, the glyph-like sign matches the face of the pot-bellied individual very closely, while in others it is much more stylized, showing only the dots for the two eyes and mouth. 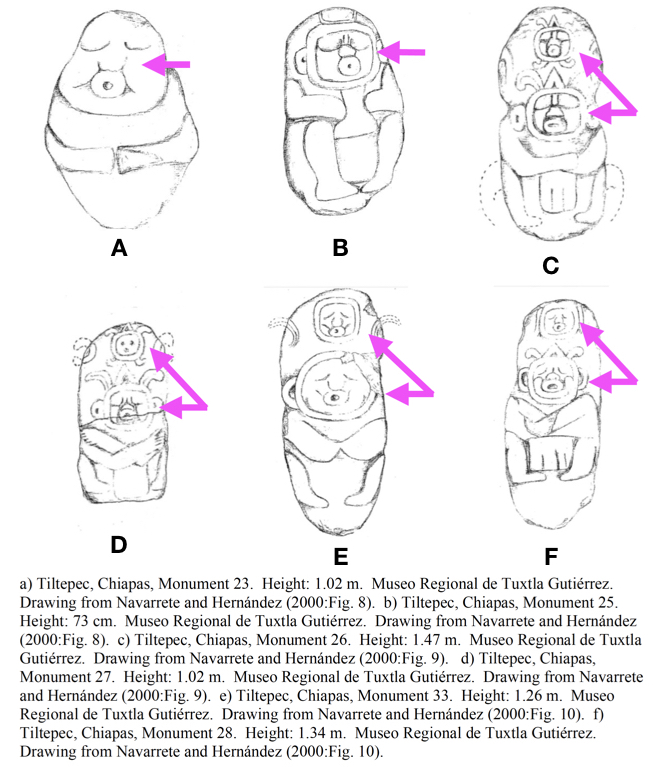 The similarity between these early examples of T533 and later ones can be appreciated in Figure 7. I propose that these glyph-like signs are in fact early examples of T533 not only labeling the figures as ‘lords’, but also associating the office of rulership with the ritual specialization practiced by these potbellied individuals. More interestingly, this association appears first in Mixe-Zoquean or more specifically Mixean territory, rather than Mayan territory: while potbelly sculptures with the howling expression are also found in highland Guatemala, there are no cases of such sculptures bearing a T533-like sign. So it is possible that this sign could be a case of diffusion from a non-Mayan tradition into a Mayan tradition. 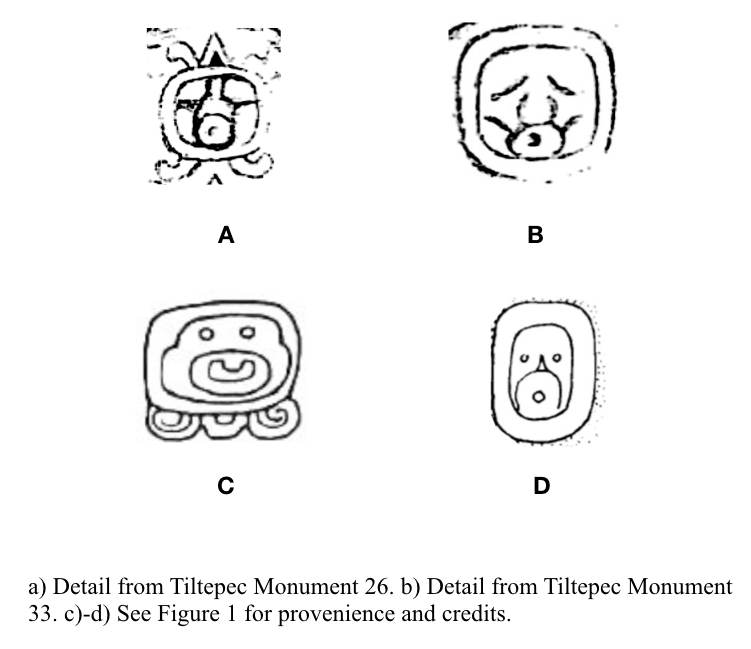 While some might use this type of evidence to support the idea that the term ʔaajaaw ‘lord, ruler’ derives etymologically from a compound meaning ‘he of shouting’ or ‘he who shouts’ (i.e. ‘shouter’), as proposed by Stuart (1995:190-191), the linguistic data preclude such a solution, as recently explained by Terrence Kaufman (personal communication, 2020). First, the term is reconstructible as *ʔaajaaw to Proto-Mayan (Kaufman with Justeson 2003:84-85). Second, although *ʔaj= ‘male proclitic’ is reconstructible to Proto-Mayan (Kaufman with Justeson 2003:83), the term *ʔaaw ‘shout(ing)’ is not: it is reconstructible to Proto-Western Mayan (Kaufman with Justeson 2003:716), a much later stage, although its attestations in Yucatecan, if not the result of diffusion from Greater Tzeltalan or Ch’olan specifically, could point to a Southern Mayan (Late Proto-Mayan) stage. Third, and more significantly, a compound consisting of these two roots would yield *ʔaj=ʔaaw, not *ʔaajaaw: note that the vowel of *ʔaj= ‘male proclitic’ is short, not long like the first vowel of *ʔaajaaw, and note that *ʔaaw ‘shout(ing)’ bears an initial glottal stop, which would not disappear upon compounding. In fact, not a single Mayan language preserves evidence for a medial glottal stop in this root, and not a single Mayan language preserves evidence for a synchronic analysis of this root based on ‘male proclitic’ plus ‘shout(ing)’.

To conclude, I propose that the iconographic motivation of T533 ʔAJAW can be explained on the basis of the shouting or howling imagery evident in the potbelly tradition, but especially the examples with associated T533 signs described by Navarrete and Hernández (2000) for Tiltepec and by Guernsey (2010) for highland Guatemala. This does not necessarily mean that the possible cases of T533-like signs on the potbelly sculptures from Tiltepec are meant to be read with a Mayan value. For one, such sculptures are well within the region of likely Mixean speech; also, signs similar to T533 can be found in non-Mayan iconography, as with the case of the Young Lord sculpture (Reilly 1991), and other, even earlier examples of Olmec iconography (Fields 1989). I merely propose that the association between ritual specialists engaged in the act of howling and the T533-like signs present in the potbelly sculptures reviewed here explain the association between T533 and rulership: rulers may have co-opted such ritual imagery for their own purposes.

Fields, Virginia. 1989. The Origins of Divine Kingship among the Lowland Classic Maya. PhD dissertation, University of Texas at Austin.

Guernsey, Julia. 2010. Rulers, Gods, and Potbellies: A Consideration of Preclassic Sculptural Themes and Forms from the Pacific Piedmont and Coast of Mesoamerica. In The Place of Stone Monuments: Context, Use, and Meaning in Mesoamerica’s Preclassic Tradition, edited by Julia Guernsey, John E. Clark, and Bábara Arroyo, pp. 207- 230. Washington, D.C.: Dumbarton Oaks Research Library and Collection.

—–. 2005a. The Iconographic Origin and Historical Development of the T533/AM1 7AJAW ‘Lord, Ruler’ Title.  Unpublished Ms.

Nicholson, H. B. and Cordy-Collins, A. 1979. Pre-Columbian Art from the Land Collection. Los Angeles: California Academy of Sciences.