This note proposes that T128/32P TIʔ for tiʔ ‘mouth’, as normally defined graphically, actually incorporates an infixed or conflated, Early Classic version of T1/HE6 ʔu. More specifically, the dots present on the leftmost component of T128 are shown to characterize early designs of T1/HE6 ʔu. This graphic incorporation was reinforced linguistically, as I argue here, by the inalienable nature of the noun tiʔ ‘mouth’, requiring that it be typically possessed with a person marker, most frequently u- ‘his/her/its’, or that it take a suffix to indicate that it was unpossessed, either -il(based on contemporary languages) or -Vs (in Classic texts). Whether through infixation or conflation, the presence of T1/HE6 ʔu remained transparent to scribes throughout most of the Early Classic period (ca. 200-600). Nevertheless, by the Late Classic period (ca. 600-900), some scribes at some sites appear to have reanalyzed the incorporated T1/HE6 ʔu as part of the graphic design of T128/32P, and began to spell the possessive marker u- by means of a separate, and thus, from a historical perspective, redundant, syllabogram ʔu. During the Late Classic, in fact, a redesign of T128/32P, involving a horizontal flipping of the conflated T1/HE6, further supports the proposition that some scribes at least were no longer recognizing its presence, but simply considering it part of T128/32P itself. The analysis presented here, which remains preliminary, has consequences for the linguistic analysis of several expressions, reviewed here, but especially for the study of Mayan paleography.

First, the signs in question must be introduced. Thompson’s (1962) catalog exemplars for T128 are seen in Figure 1A; Macri and Looper’s (2003) counterpart, 32P, is seen in Figure 1B. Some of Thompson’s examples are conflations of T128 with other signs (at least the last example is for sure); I take his first and third examples (blue arrows) to be the relevant ones. Macri and Looper’s examples can be characterized as follows: the first is the T128-like version, which may referred to as the non-MOUTH version; the third is the MOUTH version, which is often human- or human-like, but in some examples, especially late ones, may appear more zoomorphic than anthropomorphic; and the second is the combination of the non-MOUTH and MOUTH versions.[1] Next is T1: I use “T1” to refer to a variety of signs that have the same value, ʔu, which I consider to be stylistic variants of the same sign, namely, T1, T2, T3, T10, T11, T13, among others. Figures 1C-D illustrate only the examples of relevance here. These and others are classified by single code, HE6, in Macri and Looper (2003); Figure 1E illustrates only the HE6 variants of relevance here. 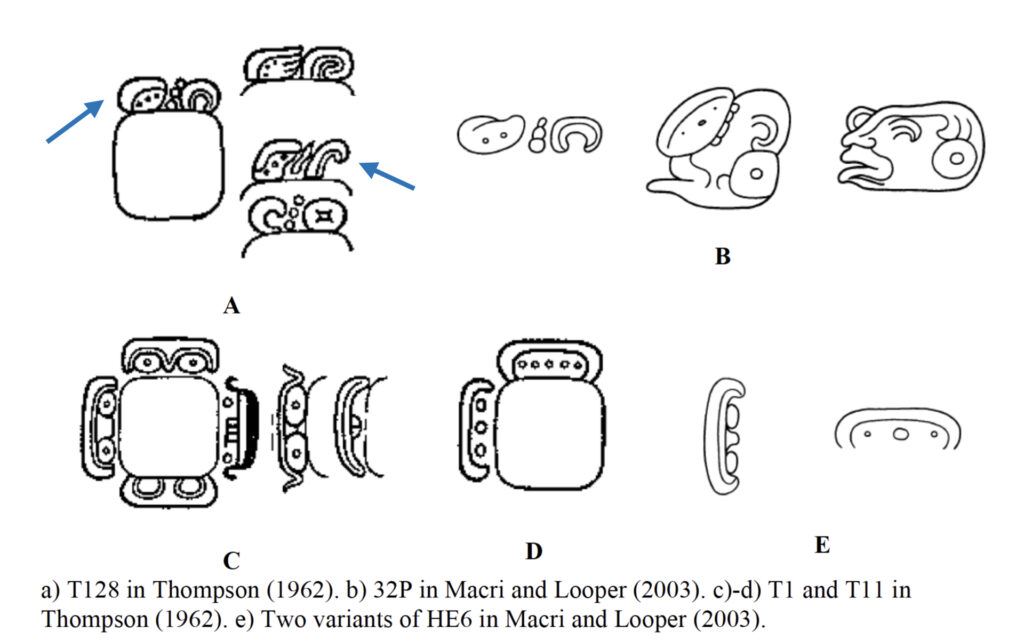 A detailed description of the traits of T128, both its non-MOUTH and MOUTH versions (allograms), is provided in an unpublished manuscript (Mora-Marín n.d.a) still in progress. Readers may request my most recent version by email. For now, to simplify the discussion, I will move on with a description of Early Classic designs of T1 that will prove relevant. Figure 2 presents a classification of Early Classic designs of T1 advanced in a different manuscript still in progress dealing with the paleography of that sign (Mora-Marín n.d.b). Design 1 is attested already in the painted stone block from San Bartolo Sub-V (Girón-Ábrego 2015; Mora-Marín 2020, 2021a), and is therefore very early; it persists through at least the first half of the fifth century CE. Design 2 is derived from Design 1 through the addition of additional dots; it is attested as early as ca. 120 CE, based on the possible date of 8.4.0.0.0 on the fragmented jade celt from Dumbarton Oaks, and it persists through most of the Classic period. These two designs were innovated during the Late Preclassic period. Design 3 postdates these; it involves the addition of a central, triangular element, and can be argued to be an early Early Classic innovation. Design 4 is also an early Classic innovation, based on Design 2 plus the addition of banding to the bracket element of T1; Design 6 shows a parallel development but this time based on Design 3. Indeed, it would appear that both Designs 4 and 6 appear during the second half of the fourth century CE, as I argue in Mora-Marín (n.d.b). 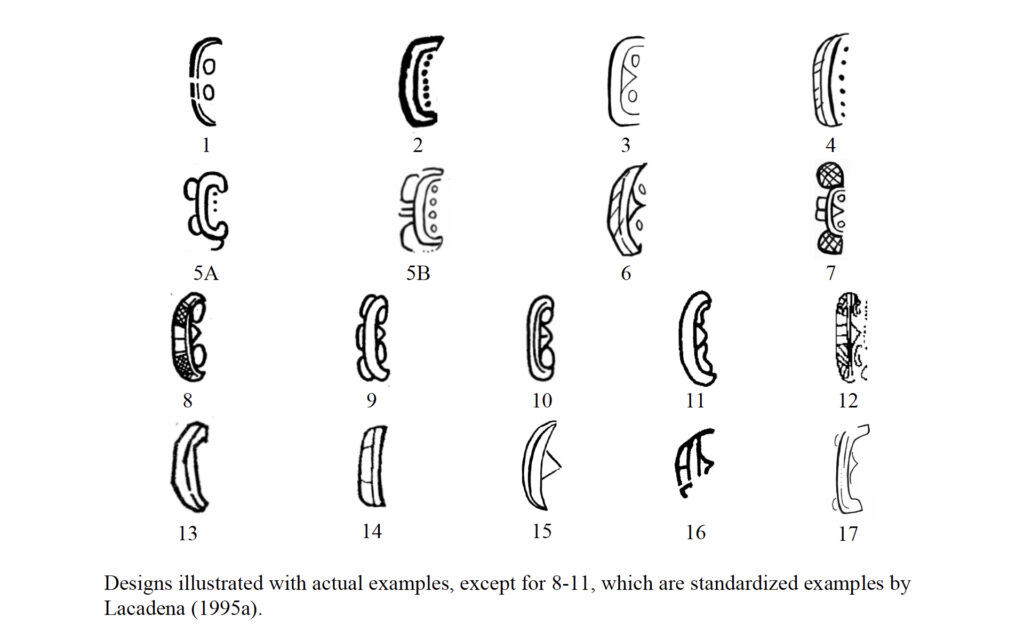 It is now time to state the hypothesis of this note with support from the data: T1/HE6 ʔu is graphically infixed into or conflated with the leftmost, oval-shaped element of T128/32P TIʔ ‘mouth’. This possibility had already been considered by Matthew Looper and Yuriy Polyukhovych (Looper, personal communication, 2020) during the process of cataloging texts for the MHD, but those authors ultimately rejected the idea, for reasons briefly described below. Figure 3 presents a variety of Early Classic examples of the Glyph F collocation. In these examples, the arrows point to a version of T1, either Design 4 (Figures 3A-B) or Design 2 (Figure 3C), conflated within the oval-shaped left element of T128 TIʔ, yielding [ʔu]TIʔ (if infixation is assumed) or {ʔu}TIʔ (if conflation is assumed). Figure 3A depicts an example from the mural on Rio Azul Tomb 1, drawn by Mary Jane Acuña, with Design 4 of T1, exhibiting a bracket element with a double outline, which contains banding. This collocation thus represents [ʔu]TIʔ-HUN-na. This same design is represented elsewhere on the same mural, as seen in Figure 3D, in a collocation where T1 is employed in graphically autonomous configuration, corroborating that the scribe who painted the mural was in fact utilizing this design productively as the syllabogram ʔu. Figures 3E-F show examples of Design 4 of T1 in other Early Classic texts for comparison. This same design was utilized in the collocation in Figure 3B, from Tikal Stela 31, whereas the collocation in Figure 3C, from Copan Stela 63, employs Design 2 of T1, seen in its autonomous configuration in Figure 3G, which expresses the collocation ʔu-CH’AM-wa. Both collocations, the one from Tikal Stela 31 and Copan Stela 63, can now be transcribed more accurately as [ʔu]TIʔ-HUN-na. 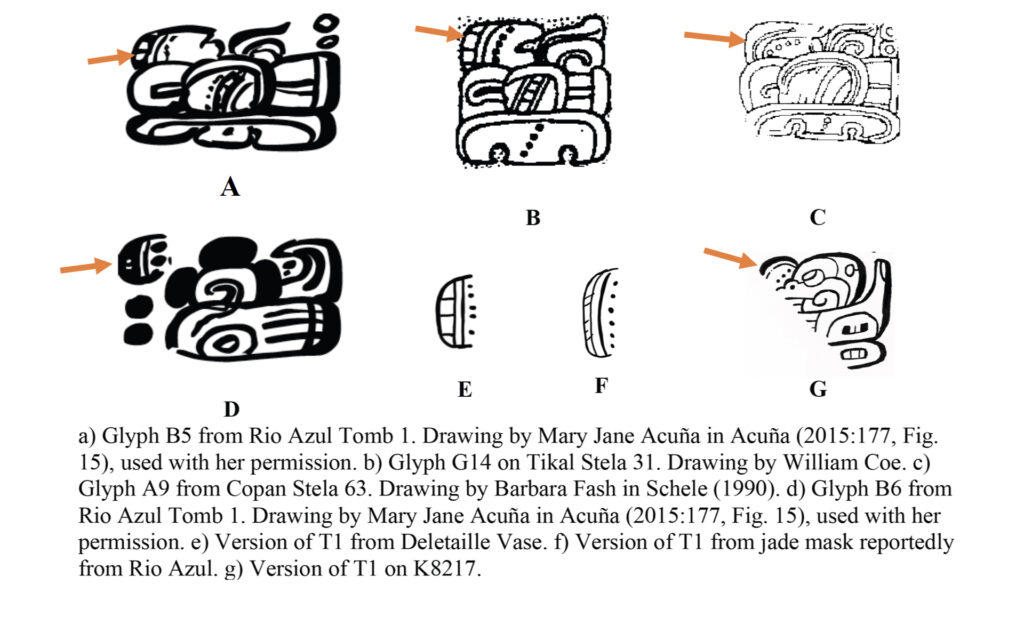 There is evidence from other contexts for the graphic incorporation (through infixation or conflation) of T1 ʔu within other glyphs. Previously, Dmitri Beliaev (personal communication, 2020), in his investigation of texts from Rio Azul and Tikal, has argued for the graphic incorporation of T1 within the “Old Man” or “Old God” (also “Dios Mechudo” and “Dios Barbudo”) logogram MAM, for Proto-Ch’olan *mäm ‘grandfather, grandson, nephew’, originally deciphered by Stuart (2007). More specifically, Mora-Marín (2021b:6–8) has argued that the design of T1 incorporated within the MAM logogram —conflated with the Old Man’s bangs— corresponded to Designs 2, 4, 13, 14 of his classification (Figure 2) as seen in Figure 4. Designs 13 and 14 differ from Designs 2 and 4 by their lack of dots, showing only the bracket elements of T1 instead. Thus, the examples in Figures 4A, 4C, and 4D can be transcribed more accurately as [ʔu]MAM. 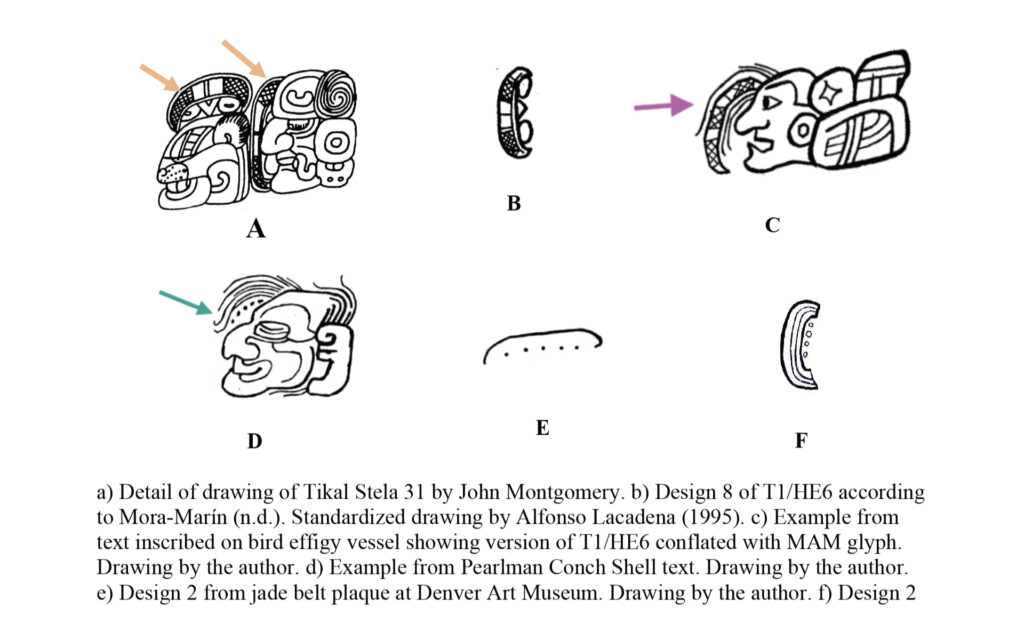 In addition to allowing for a more precise reading of the frequent contexts of T128, such as the Glyph F collocation, the recognition of the typical embedding of T1 ʔu within T128 TIʔ also has the potential to elucidate less frequent contexts. For instance, Houston (2009:Figure 3) translates a phrase on Dos Pilas Panel 19:R2-R3 as  ‘guardian [?] of he of the nine [or many] mouths’; the final glyph block in fact can now be transcribed ʔaj-B’OLON-[ʔu]TIʔ, so that a more precise translation would be ‘Mr. nine are his languages’. The design of T1 embedded within this example of T128 is a Late Classic version of Design 2, one that was commonly used at Dos Pilas (cf. Dos Pilas Panel 19:P1).

It is now time to say a few remarks about linguistic structure. The lexical referent of T128 can be traced back to proto-Mayan *tyiiʔ ‘mouth’ (Kaufman with Justeson 2003:262–266), with reflexes such as proto-Ch’olan *tiʔ and proto-Yucatecan *chiʔ. In most Mayan languages it is clear that this term is extended metaphorically (e.g. ‘edge’) or metonymically (e.g. ‘speech/language’) to variety of contexts, yielding a wide range of polysemies. In contemporary Ch’olan and Tzeltalan languages, when it refers to ‘mouth’, the noun is inalienable: it is either possessed by means of an ergative/possessive marker (e.g. u- ‘her/his/its’), or it is unpossessed and suffixed with a -Vl suffix (-il in Ch’ol, -ir in Ch’orti’; apparently -a(l) in Yokot’an). (In some cases, when possessed, it also requires a -Vl suffix, particularly when it is possessed by some types of inanimate possessor). In Classic texts, the unpossessive suffix has the shape -Vs (Stuart et al. 1999; Zender 2004a), probably for -is. This means that tiʔ should be expected to occur either possessed with u- or unpossessed with either -Vl or -Vs in Classic texts. The proposal that so many instances of T128 actually include a conflated or infixed ʔu, therefore is consistent with the linguistic expectation.[2] I recommend Zender (2004b:216–221) for additional discussion of the linguistic evidence relevant to tiʔ in the context of the tiʔsakhuun title.

Although T1 ʔu was consistently embedded within T128 TIʔ during the Classic period, there is clear evidence that by the beginning of the Late Classic period scribes were increasingly reanalyzing the embedded T1 ʔu as simply a graphic element of T128 TIʔ.vThis is evident in the reinforcement of the infixed or conflated ʔu by means of an additional, autonomous ʔu sign, a relatively common pattern in Late Classic texts, as in the examples from Figures 5A-D. This reinforcement, so far unattested in Early Classic texts, could support preserving the catalog exemplars in Thompson (1962) and Macri and Looper (2003) unchanged, and maybe adding examples without the dots, with a note regarding chronological differences. Note too that in Figure 5D, the embedded example of T1 ʔu within T128 has been flipped horizontally, revealing that the scribe was in fact ignorant of the original motivation of the line of dots.

Finally, while Matthew Looper and Yuriy Polyukhovych (Looper, personal communication, 2020) interpreted examples like the ones in Figure 5, involving an autonomous syllabogram ʔu preposed to T128 TIʔ, as evidence that the dots within the left oval-shaped component of T128 were not due to the incorporation of T1 ʔu, I would argue that both the lateness of such examples, and the fact that some such cases show a reorientation of the internal details of the oval-shaped component (cf. Figure 5D), actually support the hypothesis.

Acknowledgment. I am indebted to Mary Jane Acuña for her generous permission to use her drawings of the glyph on the mural of Rio Azul Tomb 1, and to Matthew Looper for reading and offering comments on a much longer draft over a year ago.

Zender, Marc U. 2004a. A Study of Classic Maya Priesthood. Ph.D. dissertation, Department of Archaeology, University of Calgary.

Zender, Marc U. 2004b. On the Morphology of Intimate Possession in Mayan Languages and Classic Mayan Glyphic Nouns.  In The Linguistics of Maya Writing, edited by Søren Wichmann, pp. 195-210. Salt Lake City: University of Utah Press.

[1] The anthropomorphic nature of the MOUTH variant is confirmed by the presence of the O-shaped element that is commonly placed in signs that depict parts of the human body (Hopkins 1994; Hopkins and Josserand 1999; Mora-Marín 2008a). This O-shaped element was derived from a U-shaped element by means of a regular graphic change (Lacadena 1995), briefly discussed here in connection with the Early Classic design of the MOUTH sign. It seems possible that T128 (non-MOUTH) and the MOUTH variant were conflated at some point, late in the Early Classic period, at least by some scribes, but that they were originally distinct graphemes with the same value (allograms).

[2] The uses of this this root with the meaning  ‘mouth’ are difficult to investigate in contemporary Ch’ol and Ch’orti’, which appear to prefer reflexes of proto-Mayan *ʔeeh ‘tooth’, which in addition to ‘tooth’ and ‘(sharp) edge’, appears to have attained the meaning ‘mouth’ via metonymy. That said, this noun is also inalienable: Ch’ol ʔej is typically possessed and takes -äl when unpossessed (Aulie and Aulie 1999:35), and Ch’orti’ ʔej is also typically possessed and takes -ir when unpossessed (Hull 2016:9, 244).