It is more than fair to say that the discovery and publication of the Cascajal Block (Figure 1) by Rodríguez et al. (2006a, 2006b) launched a new era of Olmec writing scholarship, as the list of references at the bottom indicates. The block was found at the site of Cascajal, approximately 13 kilometers from the site of San Lorenzo, Veracruz. 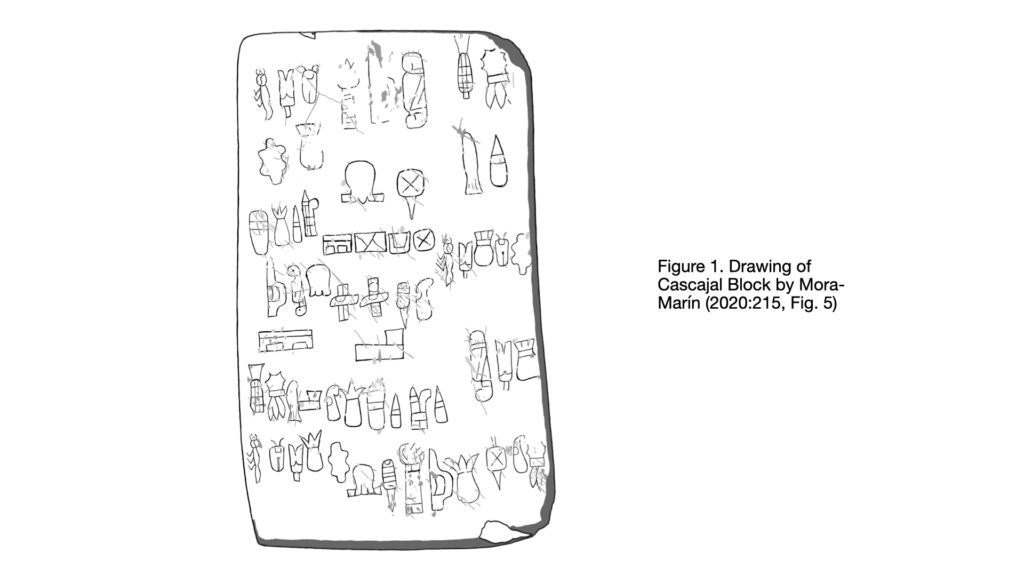 Following that publication, a number of authors, myself included, felt an urge to attempt to grapple with the unusual traits of this artifact, particularly its inscription, in a number of different ways. In my case, I decided to attempt a formal analysis of the format of the inscription to test whether the formatting proposed by Rodríguez et al. (2006a) was the best model. Those authors had argued that the text was to be read oriented vertically, as seen in Figure 2A, reading in rows, left-to-right, top-to-bottom. A few weeks after their publication came out, I had arrived at a different conclusion. My paper on the matter came out three years later (Mora-Marín 2009), and proposes a horizontal orientation, as seen in Figure 2B, reading in columns, top-to-bottom, left-to-right. 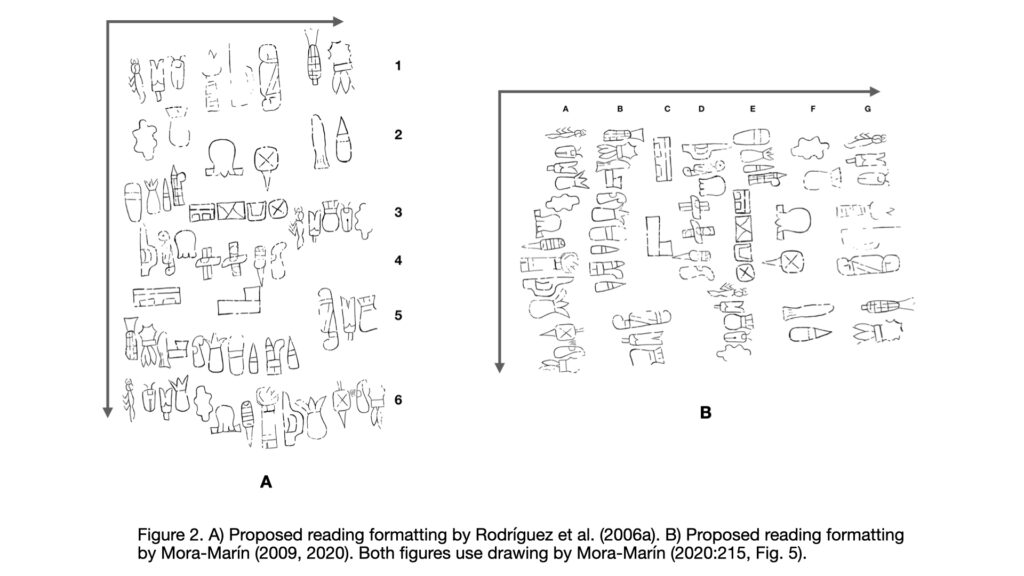 Other authors have approached the formatting differently. At least two authors recognize a similar clustering formatting, as in the case of Macri’s (2006) and Justeson’s (2012), seen in Figures 3A and 3B, respectively. 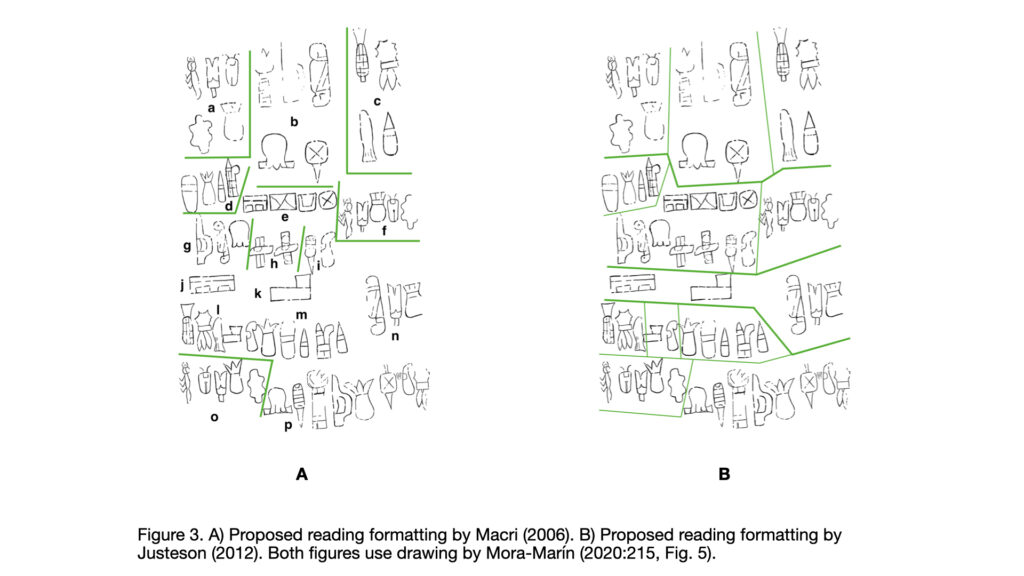 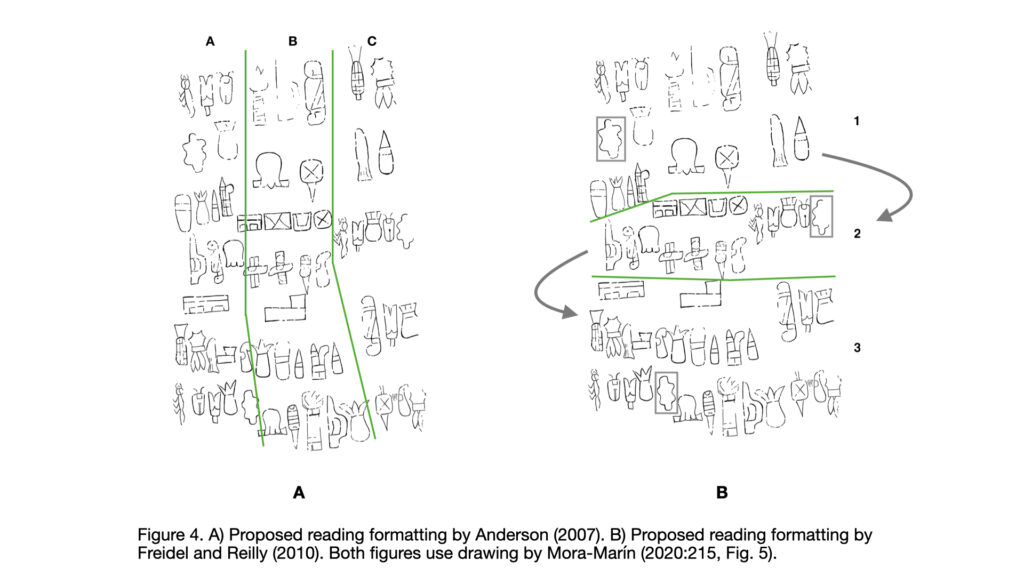 As my most recent publication on the matter (Mora-Marín 2020) reviews some of these issues, I will not address them further here. Instead, this note will revisit a topic of interest to many students of the Cascajal Block and Olmec writing more generally: the iconography of the sign inventory of the Cascajal Block’s inscription. Indeed, in addition to working on the formal traits of the text immediately after it was published, I also began to research the iconographic nature of the sign inventory. I prepared a manuscript in 2006, revised further in 2010, that was circulated among a few scholars, and cited in Freidel and Reilly (2010) and Carrasco and Englehardt (2015). I have since presented and published a few observations from that manuscript elsewhere (Mora-Marín 2016, 2019, 2020). However, the vast majority of ideas in that 80-page manuscript remain unpublished. Also, other authors have commented in detail on the iconography of the sign inventory (Rodríguez et al. 2006a; Ortiz et al. 2007; Rodríguez and Ortiz 2007; Magni 2012[2008]), which makes it possible to engage more meaningful discussion on the matter. Since iconographic analysis could be an aid in the task of decipherment, it is a worthy subject of study. For these reasons, I have decided to begin a step-by-step presentation of some of these ideas here.

I will begin by using the classification of signs by order of occurrence within the block seen in Figure 5. This classification, which appears in Mora-Marín (2020:220, Fig. 11), is a revised version of Rodríguez et al.’s (2006a:1613, Fig. 5) original classification. Following Rodríguez et al. (2006a), I will refer to each Cascajal sign as “CS” followed by the numeral listed beside each sign. 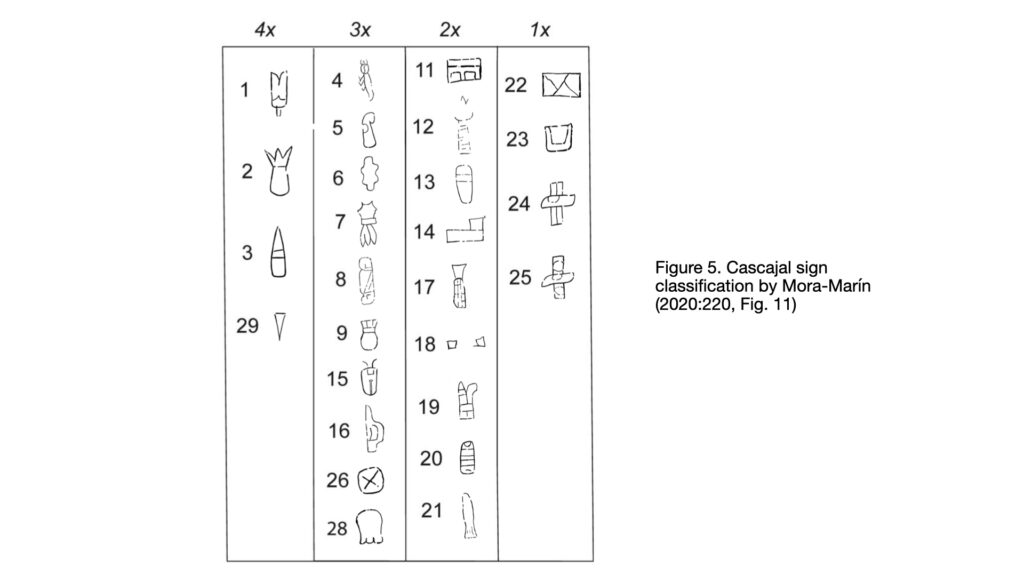 A few methodological considerations are necessary, based on Mora-Marín (2010:4–6). When comparing signs in different scripts, or even different historical stages of a single script, it is necessary to consider at least three different possible sources of graphic similarity: 1) shared descent; 2) contact diffusion; and 3) independent innovation.  In the last case, if two signs from different scripts exhibit the same iconic motivation, one has to consider the possibility that such similarity is due to the fact that the real-world source that serves as the pictorial model for the sign may be available to scribes from different traditions, and thus, that they could have arrived independently at similar graphic innovations based on the same real-world referent.  For instance, CS6, depicting an animal hide, is too realistic a sign to be used, on its own, as evidence for relationship between scripts. Any scribe, in any tradition, may have used an animal hide as an iconographic basis for a sign, and since animal hides may be prepared very similarly in different cultural traditions, that alone could account for the similarity of such a sign in the Cascajal, Epi-Olmec, and Mayan writing systems. Moreover, comparisons are also hindered when one is dealing with a graphically simple sign.  Simple and complex signs should be weighed differently. Simple signs, those containing a very general outline and few or no internal elements, can resemble one another as a result of stylistic simplification, even when they are derived from different iconographic sources. In contrast, a complex sign present in two distinct scripts offers a better test case for relationship.

An additional problem results from the vagueness in Rodríguez M. et al. (2006a), who often allude to the iconographic motivations of signs without specifying the signs in question, and only assign a specific sign number from their Cascajal Signary (CS) to their iconographic identifications for 13 signs.  Thus, they argue that the orientation of the text “is further supported by the disposition of “sky-band” elements much like those on Olmec thrones and later regional iconography,” the sign of “an apparent insect positioned as though scaling upward,” and later mention “a throne sign paired with an evident mat sign,” without detailing which signs they are referring to in each case (Rodríguez et al. 2006:1612-1613).  These authors provide explicit iconographic identifications for the following signs in their classification system (Rodríguez et al. 2006a:1612-1613, Fig. 5): CS24 and CS25 (“paired sets of eyes”); CS12/17/27 (“a thematic preoccupation with maize, or at least the ready use of such signs in the creation of a signary”); CS6 (“a skin”); CS8 (“a strung bead or plaque”); CS10 (“a dart tip”); CS16 (“object shown grasped in Olmec iconography”); CS18 (“a bivalve”); CS20 (“a possible perforator”); CS21 (“a vertical fish”); and CS1 (“cleft element and inverted V motif”).

The methodology can be summarized as follows:

With these in mind, I begin with CS1. Table 1 presents  the relevant descriptions and identifications by a variety of authors. Figure 6 presents the comparison I offered in Mora-Marín (2010), and published more recently in Mora-Marín (2009:1–2, 2020:211–212, Fig. 1). I suggest it corresponds to Joralemon’s Motif 124, and support the iconographic motivation proposed by Rodríguez et al. (2006a); in fact, most authors are in general agreement about CS1 representing a vegetal motif. Stylistically, I have previously suggested a very close parallel between the renderings of CS1 on the block (Figure 6A) and the renderings of Motif 124 on one of the famous Olmec celts from Arroyo Pesquero (Figure 6B), a site located only a few kilometers from the site of La Venta, Tabasco, as well as an Olmec celt at the Metropolitan Museum of Art (Figure 6C). On these celts, the motif in question appears as elements that make up part of the headdress of a figure that may depict a deity or a human impersonating a deity. 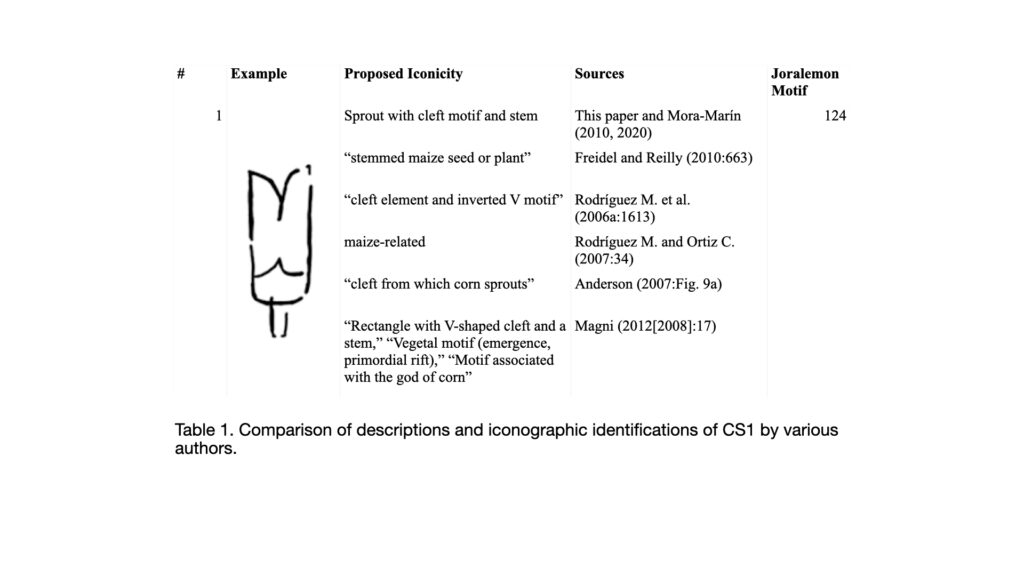 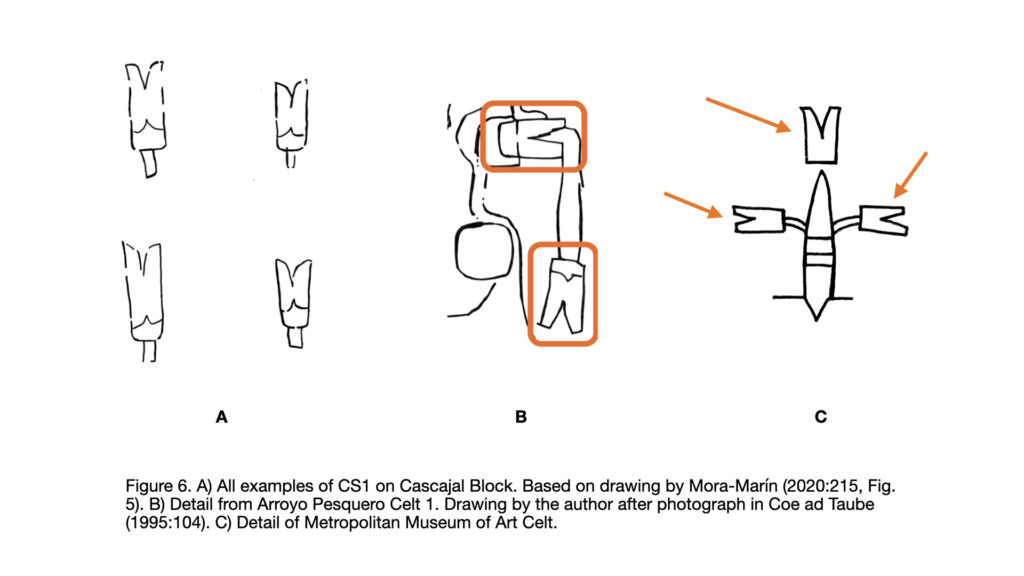 Next is CS2. Table 2 summarizes some of the descriptions and interpretations of this sign’s iconicity. This sign does not appear to have an equivalent in Joralemon’s classification. The two leading suggestions include a depiction of a pineapple and the depiction of a bag or bundle. Figure 7 presents the comparisons offered in Mora-Marín (2010), with Figure 7A showing all instances of CS2 on the Cascajal Block. Figure 7B shows one of three examples arranged in a horizontal row on a celt reportedly from the Chalcatzingo area, a comparison raised by Rodríguez and Ortiz (2007:44), Ortiz et al. (2007:17), and Justeson (2006:2), and which the first two sets of authors regard as depicting a pineapple. Figure 7C shows an interesting comparison with an object held in the hand of a personage from one of the Late Preclassic murals at San Bartolo in the Peten region of Guatemala; this comparison led me to suggest, in Mora-Marín (2010), that CS2 does in fact depict a bag or bundle. However, given that the Chalcatzingo-area celt is closer in time and cultural affiliation, I now favor a comparison with the item in Figure 7B, whatever its iconicity. 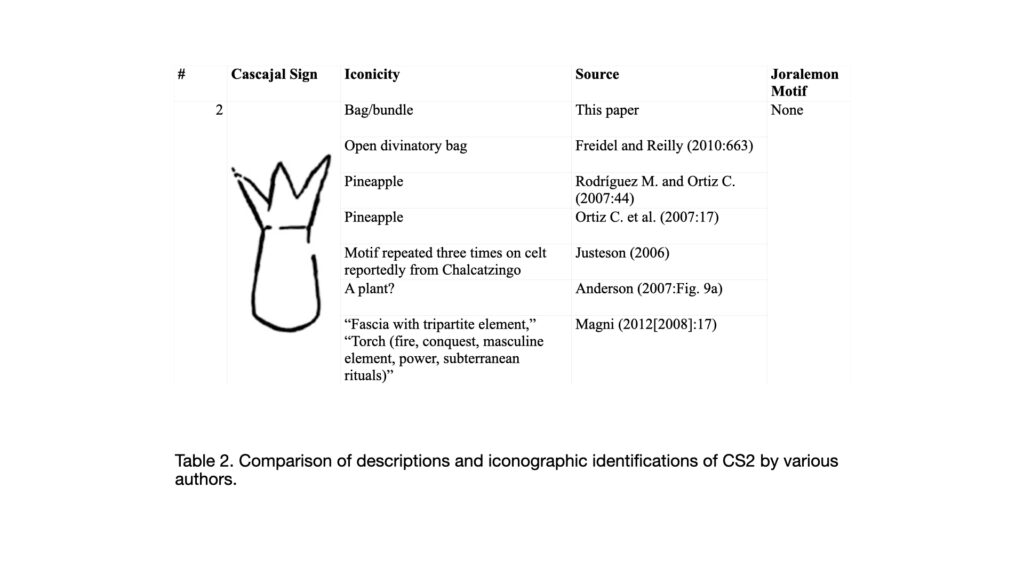 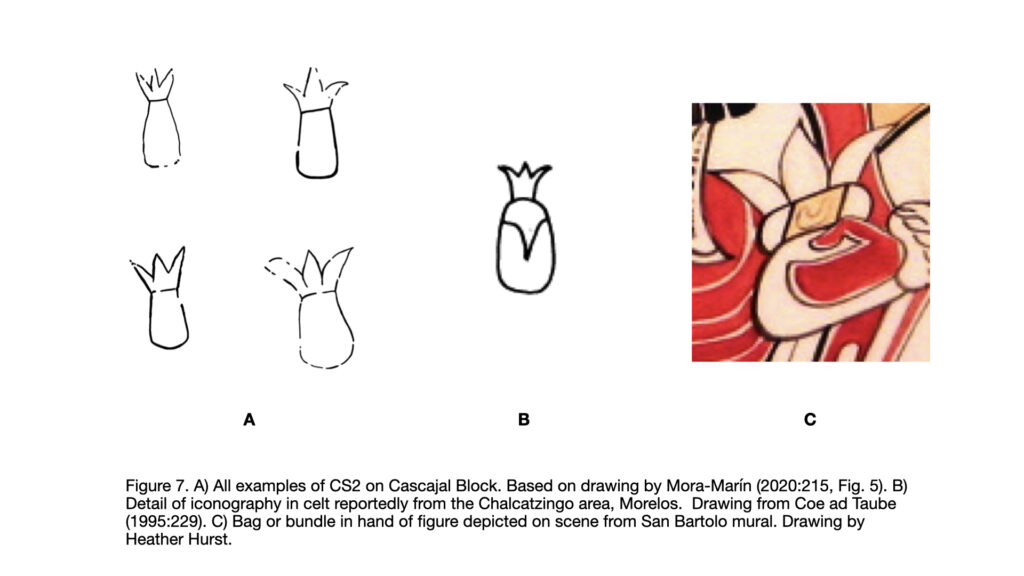 Table 3 summarizes the proposals for the iconicity of CS3, and Figure 8 presents iconographic evidence in its support.  This paper favors the identification of CS3 (Figure 8A) as a sprouting shoot, often seen sprouting from the cleft motif (Figures 8B–D). As such, CS3 would correspond to Joralemon’s (1971:13) Motifs 81 and 88, which he defined as “maize sprouting from the head cleft” and “banded maize,” respectively.  The band across the object, which gives it the appearance of candy corn, could be a “reflection” sign, suggesting that the object is shiny.[1] 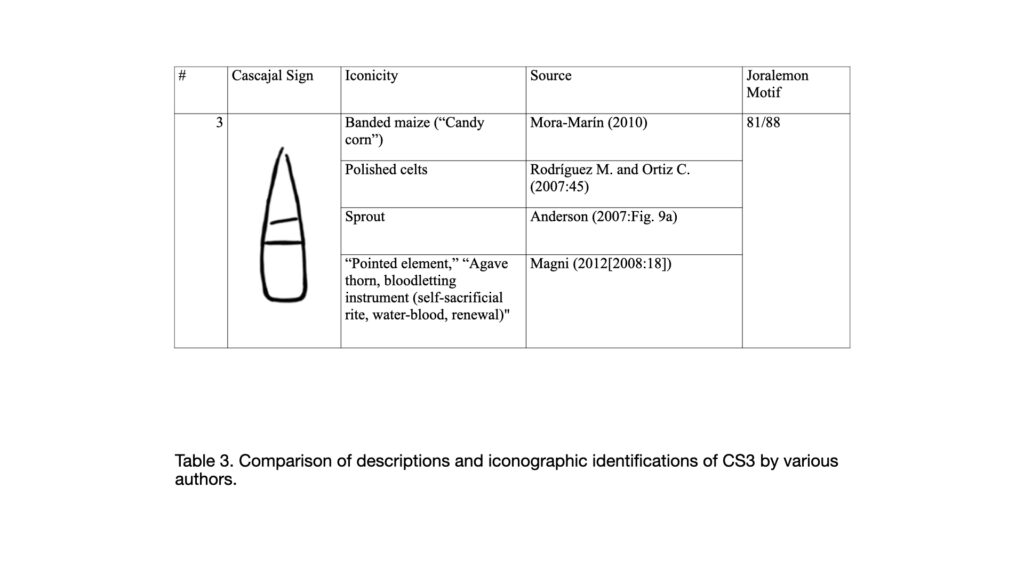 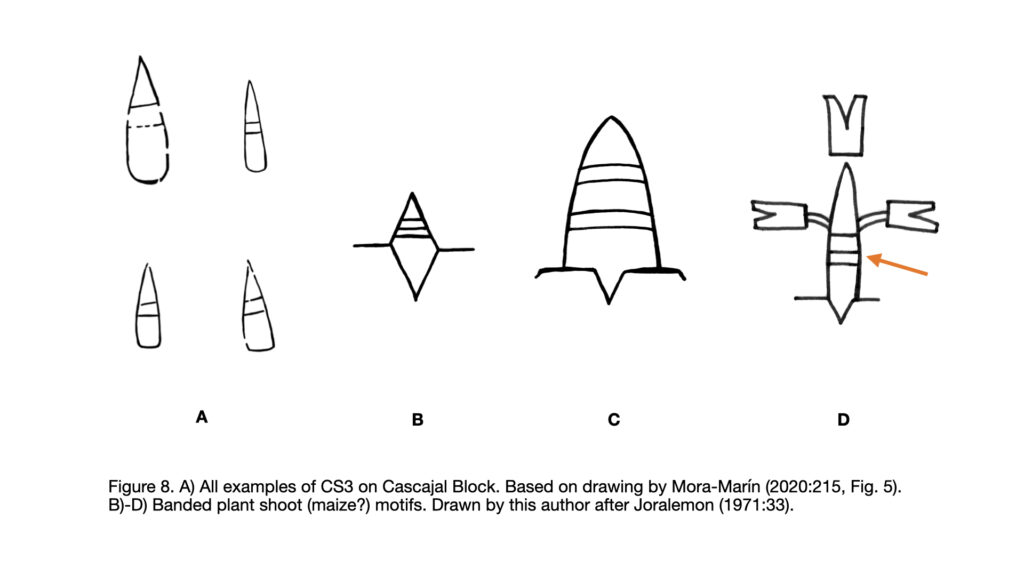 Table 4 provides a summary of proposals regarding CS29, which this author redefined graphically to include just the triangular element (Mora-Marín 2009, 2020).  I regard CS29 (Figure 10A) to be a depiction of a perforator tip (see sections marked by orange arrows).  CS29 is only tentatively distinguished from CS20 (Figures 10B–C, see blue arrows), given the rationale in Mora-Marín (2009:397-398, Fig. 2).  While it is plausible to isolate CS26 as a separate sign, CS20 only occurs with CS29, and thus the two may not be separable; there are two instances where CS26 seemingly replaces CS20 on top of the presumed perforator tip (Figures 10D–E), but this could be a case of CS26 overlapping CS20. To my knowledge there exist no iconographic examples of perforators that exhibit a motif that resembles CS20, or CS26 for that matter.  For now, it is suggested that CS10 is likely the tip of a perforator, while CS20 the handle, but potentially a separate sign. In most drawings of the Humboldt Celt (Joralemon 1971:25) there is one element that closely resembles CS20 (Figure 10F), but a more recent drawing by this author based on a photograph published in Benson (1996:134, Fig. 2) (Mora-Marín 2022), shows this to be an element resembling the down-turning motif instead (Figure 10G). 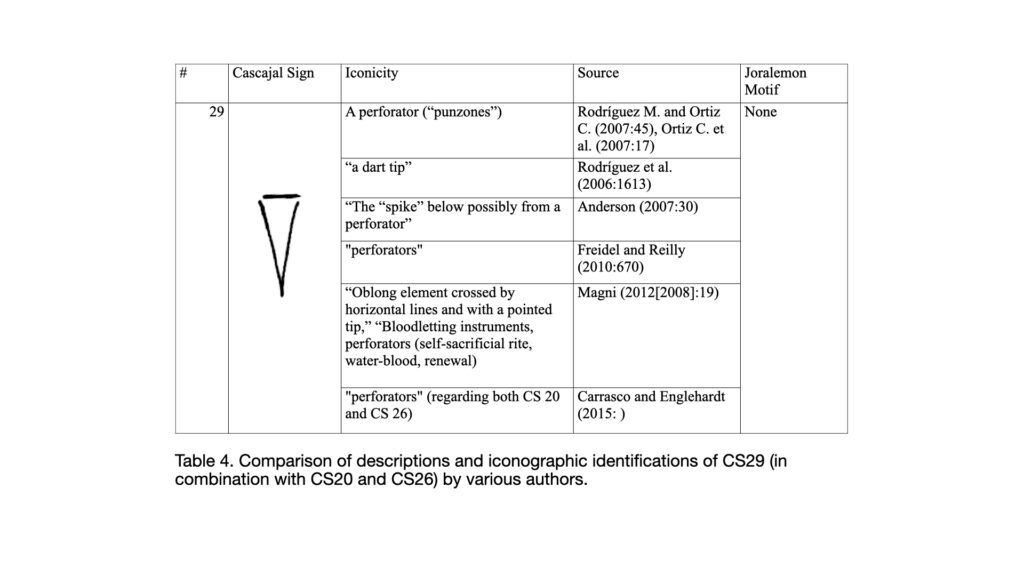 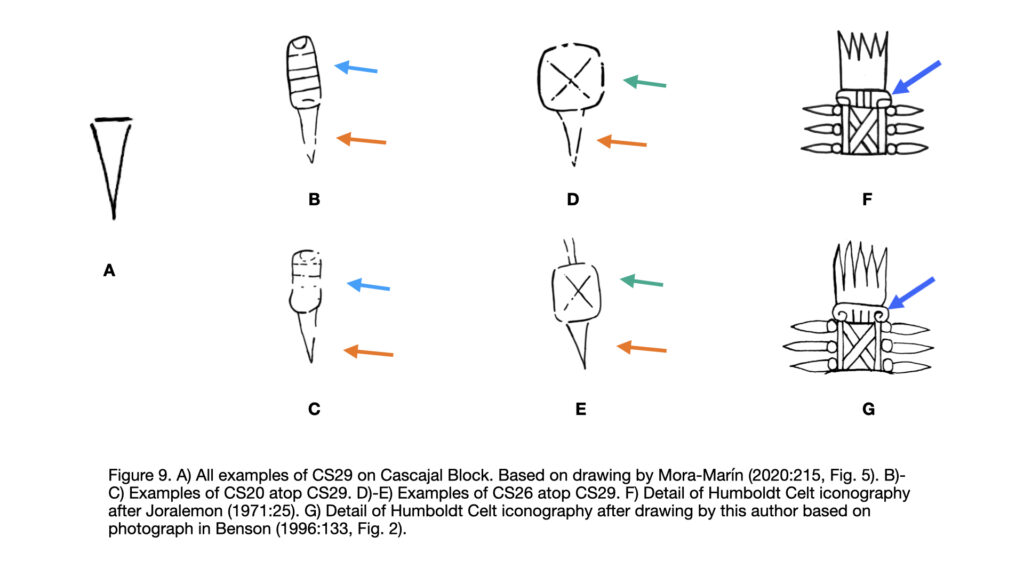 The goal of this note was to review some of the iconographic evidence for the four most frequent signs in the Cascajal Block inscription. Future notes will review the evidence for the rest of the signary.

[1] Alternatively, the band could be a sign indicative of a specific color.  For example, the double-merlon sign was identified by Taube (1995:89-91) to be a likely signifier of “green” used in the representation of green objects, such as quetzal feathers and jade implements.  If CS3 represents a maize ear or leaf, it would be unlikely that the band represents a color, since the most likely color of a maize ear, still in its husk, would be green, which would call for the double-merlon sign for “green.”  If the sign represents a cob, then the band could feasibly stand for “yellow,” although not all maize produces yellow kernels; this is unlikely in any case because a representation of a cob would almost certainly show the kernels, as is the case with CS17, which CS3 lacks.  For now, the function of this band as a “reflection” sign seems more fruitful.