Jarana dance lessons this past April of 2013, imparted by Miguel Óscar Chan Dzul (Valladolid, Yucatan), as part of the Yucatec Maya Spring 2013 class. For more information on Tore’s work and that of his research group (CLEAR), click here.

Glyphic pumpkins by the Ling 558 students 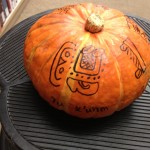 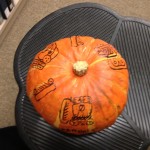 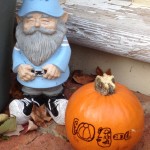 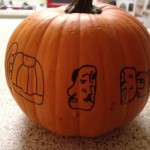 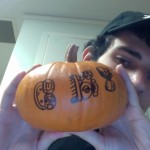 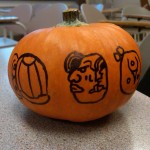 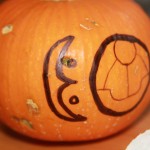 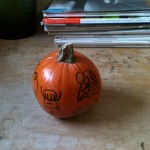 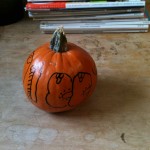 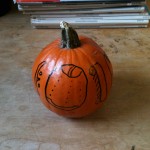 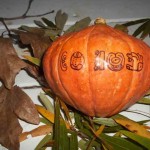 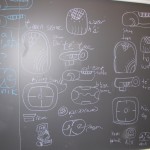 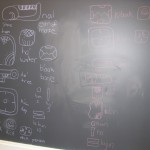 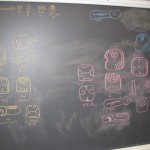 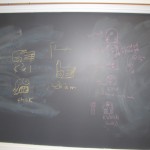 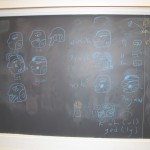 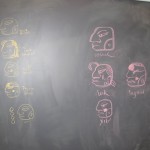 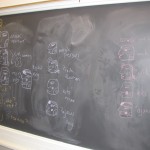 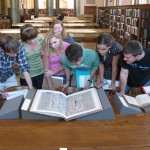 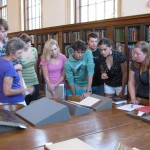 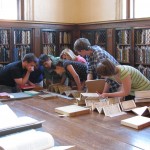 Mesoamerican Writing Systems met today at the Wilson Library to get a first-hand look at the George Stuart Collection, with April Brewer, Rare Book Collection Public Services Librarian, at the helm. Having just finished a short assignment on a few passages of the Dresden Codex, the class wasted little time to examine a beautiful screenfold facsimile.

This coming week we’ll be working on deciphering Mayan writing using the Dresden Codex (not illustrated) applying essentially the same methodology as Knorozov’s.  The illustration above is a line drawing of a fragmented and reworked Maya belt plaque pendant from the Early Classic period, possibly from around AD 350-450.  It was reportedly found in Costa Rica, where it is in the collection of the Museo del Jade Fidel Tristán, San José, Costa Rica.  No toponym is present, but it is very likely from the Peten region in the Southern Maya Lowlands.

It shows two glyph blocks contained within a cartouche, probably one of three cartouches that were likely present in the original belt plaque before its fragmentation.  The first glyph block is transcribed 7u-CH’AB'[7AK’AB’] and the second JOY[yi]-ti-7AJAW.  7u-CH’AB'[7AK’AB’] is most typically found in association with ritual bloodletting by a royal individual, but its literal meaning was probably 7u ch’ahb'[al/il] 7u yak’ab'[al/il] ‘[it was] his/her fasting, his/her darkness’ (likely a couplet alluding to the ritual process).  JOY[yi]-ti-7AJAW is an accession expression, shown in a style very similar to that of Early Classic Tikal; transliterated and translated as joy-i ti 7ajaw(al) ‘s/he circumambulated as lord’, it likely refers to a ritual circumambulation prior to sitting on the throne to take office.  Many jade belt plaques of a similar nature bear references to these same types of events, and were themselves likely emblematic of accession to royal office.  [Please contact author for references to sources relevant to this text and to the decipherment of these expressions by various scholars.]